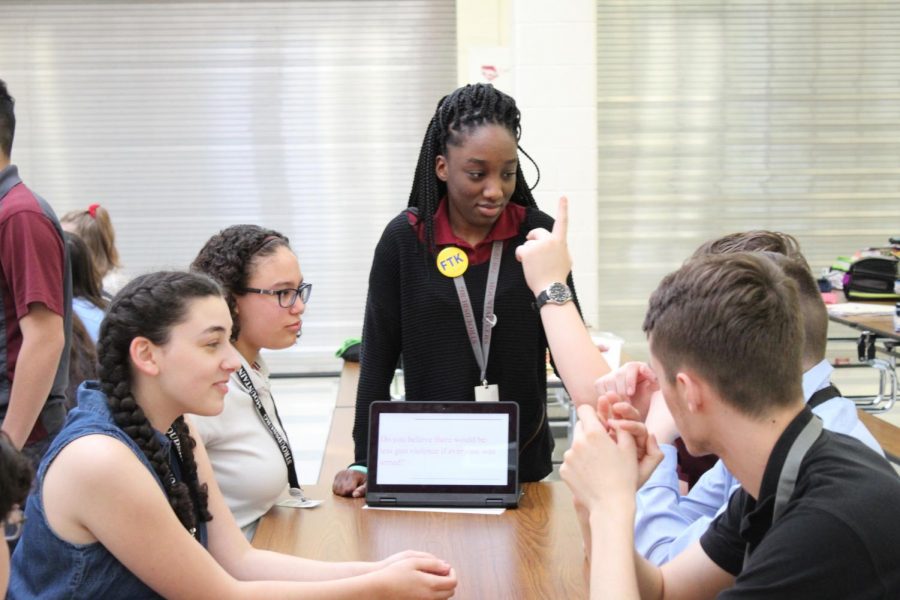 Recently, Stroudsburg Junior High School (SJHS) students were engaged in passionate discussion about gun control. The topics ranged from heavy social media monitoring to detecting a potential shooter, and they further discussed whether or not stronger gun regulations would prevent gun-related violence.  The event, held on May 18, was called “Rapid Fire” and it was held by the SJHS club called Acceptance Project.  This club focuses on promoting cultural awareness.

The event was kicked off with a simple activity: Acceptance Project adviser Mr. Tim Herb asked the student body debatable questions about gun control, and each individual had to decide where they stood on the matter.

After kicking off the event with debatable questions about gun violence, the junior high students with bowls of biryani (an Indian meal with rice, spices, and meat) eagerly gathered around Vahanvaty, as he provided a brief overview of how the exciting “Rapid Fire” activity would work. There were four “mediators” (Acceptance Club leaders) at each table in the cafeteria, each with a different topic of gun violence. After hearing each topic from each mediator, students will flock towards the topic they find most interesting. For five minutes, students from all ethnicities and backgrounds gather together and discuss topics about gun violence.

“It was a very eye-opening experience to understand where my peers came from,” said freshman Catherine Ferguson. “With more events that encourage debate among the student body, we are able to understand each other more.”

Freshman Connor Kearns described how “Rapid Fire” really gave him the opportunity to understand another peer’s views on gun violence. “There were two sides of the argument: “pro guns” and “anti-gun” but both sides had interesting perspectives. Some people who are “pro guns” believe that guns are an essential weapon to have for protection, while some who are “anti-gun” feel that weapons can easily end up in the hands of an individual who is capable of destruction.”

According to Vahanvaty, there will be other events in the works that should open discussion and debate on controversial issues. “It really inspires me how our generation is so eager to participate in a discussion and listen to each other’s viewpoints,” he said. “Being able to understand each other’s backgrounds and stories is a key element towards coming together and building a better future,” added Vahanvaty.