Young local author publishes a book about being ‘Unwanted’ 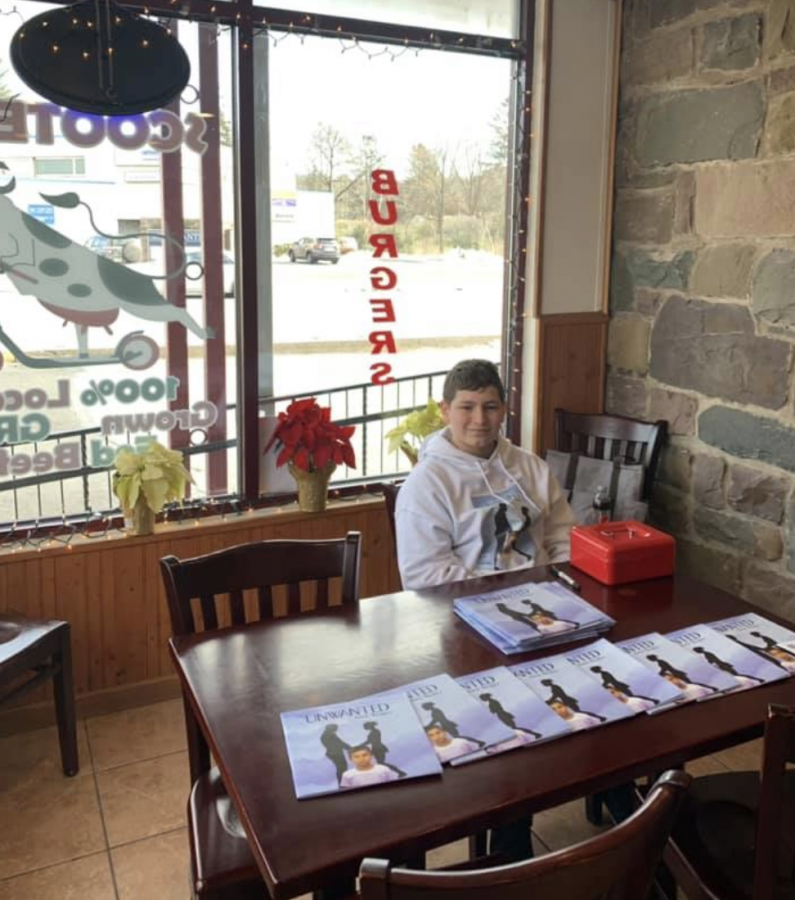 (The following story contains adult content. This feature story is about a boy named Donel Wheeler (an eighth grade student from J.T. Lambert Intermediate School) who published a book about his life titled “Unwanted”.  His book has been featured on WNEP and the Pocono Record, and it has received recognition from local State Senator Mario Scavello and State Representative Rosemary Brown. More information on how to purchase the book is located below).

It’s an early Saturday morning, and Pappa and Donel Wheeler are eating hash browns and drinking a warm cup of coffee in a small quaint house in Texas. Later during the day, they walk down to a nearby lake to look for gold coins.

“Spending time with my great grandfather by the lake is one of my favorite special memories,” said Donel. “I remember one time we found 20 gold coins in one day.”

This was the simple life of Donel Wheeler, a typical three year old boy who lived peacefully with his great grandfather (Pappa), grandmother (Kelli Kammer), stepmother, and father in Texas.

“We were really united and together as a family during that time period,” said Kammer.

“It was like I lost my best friend, he did more with me than my own father,” said Donel.

Kammer was also devastated. “It was an overwhelmingly emotional experience, it was the day when our family fell apart,” she said.

Right after Pappa passed away, Donel’s stepmother left the family. Kammer moved away to help Donel’s great grandmother, and Donel was left all alone with his father.

When Donel was living with his father and stepmother, he felt neglected because his stepmother and father were never around to nurture and take care of him. “I remember that when I wanted to intervene in a conversation, they would just ignore me. Even when I would ask about how their day was, they would just ignore me and continue to watch the television,” said Donel.

After Kammer learned what Donel was going through, Donel’s father’s new girlfriend came to pick him up in an airplane to take him to Kammer. “I felt like I was going somewhere else, like I was never wanted by anyone,” said Donel. “But at the same time, it felt right, because I knew I going to my grandmother, who would do anything for me.”

After arriving at his grandmother’s house in New York (Kammer moved from Texas to New York), Donel started to get bullied in school. The children would make fun of him for not having real parents, since his grandmother and Dorian (Kammer’s spouse) would pick him up from after school programs, and not the father. On “Bring Your Dad to School Day,” Donel’s father never came, only Dorian did. “At the time, I was only happy that I had someone to bring me to “Bring Your Dad to School Day,” said Donel.

Shortly after selling their house in New York in April of 2014, Donell, Dorian, and Kammer decided to move to Pennsylvania.

Several months later, during Christmas, Kammer had to go the hospital for a blood clot in her leg and lungs. Donel’s father promised to see Wheeler on Christmas day. But according to Donel, on Christmas Day, 2014, his father called from the hospital, and said he wasn’t going to drive three hours to see his mother in the hospital.

“I didn’t understand why he couldn’t take three hours to see his mother when she almost could’ve died, I was so angry and hurt,” said Donel.

As time went on, Donel was getting into trouble in school because of the anger he held inside. “He was hurt from all the negative comments from the bullies, and he didn’t know how to comprehend them,” said Kammer. After Kammer and Dorian found him a therapist, all of Donel’s negative energy came out. He learned how to express his feelings, and confront those who had hurt him, including his father.

“Before, I felt like I was locked in a cage. But after I got a therapist, I felt free, like I could let all my feelings out,” said Donel.

A year later, Donel’s father came to visit Donel in Pennsylvania, and asked if Donel wanted to live with him. “I just remember having nightmares afterwards of him taking me,” said Donel. After Donel confronted his therapist about it, the question came up of why Donel’s grandmother didn’t have custody over him. That day, Donel came home and cried. “At the time, I didn’t understand that the custody process was expensive, and I felt like even the people who loved me didn’t want me enough,” said Donel.

“I remember feeling hurt that my parents never came, but I was just so happy that my grandmother got full custody of me,” said Donel.

After Donel has been adopted, he started enjoying life with his new family. But one day, when he was only 13 years old, he approached Kammer about publishing journals of his life in a book.

“He always journaled his life, since it was a recommended activity by his therapist,” said Kammer. “He said he wanted to help kids who are bullying other children, because maybe they are going through the same family problems he’s gone through.”

Now, children are reaching out to Donel and asking for his autograph at book signing events. He was also invited to the State Capitol to meet with Pennsylvanian state senators. Donel’s dream is to have his book titled Unwanted in every Pennsylvanian school curriculum.

“He’s really touched the lives of so many people, it’s very inspiring,” said Kammer. “It’s very rare to find a story of trauma, abuse, and loss from a kid’s perspective, and that is why this book inspired so many people.”

“I hope I can help other kids who have been through tough times like me; kids who feel unwanted,” said Donel. “I want to give hope that anyone can love you, even if they are not your blood. Even though my parents never loved me, I know I have people in my life who love me and want me forever.”