Take a peak behind the scenes of this year’s musical, “Mamma Mia” 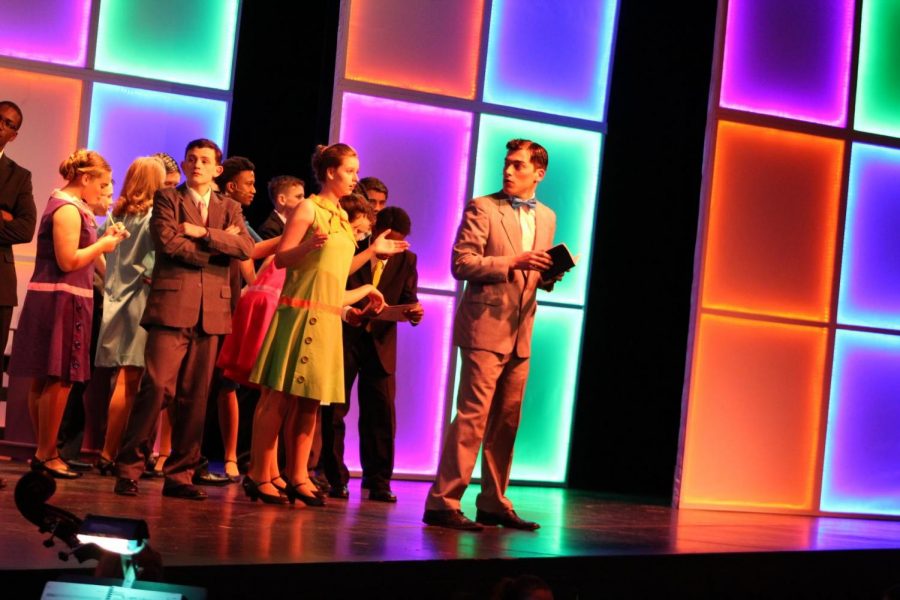 Students performing in last years musical "How To Succeed In Business Without Really Trying."

Stroudsburg High School’s annual spring musical has been a staple for many years. With a new one selected every year, audiences look forward to viewing the musicals that are performed by a cast of students, who have consistently stunned them with fabulous performances. Students who aren’t in the play don’t always realize just how much preparation actually goes into directing and casting a musical.

Performers have one common goal: to do their best, while making it appear effortless. Although some performers make it look easy, much of the audience does not realize the months of challenging rehearsals go into a production that will run for only one spectacular weekend.

So what exactly goes on at rehearsal? Junior Johanna Gelbs shares a glimpse of what happens during those practices.

“We usually start out with some singing,” said Gelbs. “We like to brush up on what we’ve already learned and get warmed up at the same time. After that, we either move to the stage or stay in the choir room to review or learn dances. This part seems to shift often depending on what needs to get done.”

Gelbs also explained how they break into groups to review and clean up pieces, while carefully putting putting all the pieces together.

Particular aspects of rehearsal can be especially tiring and draining.

“Certain days require more rehearsal of the songs rather than the dances which can be tedious,” said sophomore Hannah Kryman. “But then some days that are set aside for cleaning the dances can be tiring.”

It’s not only the people the viewers see on stage that are a part of the show. Stagehands are constantly assisting and participating in the play, even if they are not the individuals on stage.

“There are a lot of off-stage backup singers this year that are featured in every song. There are also a lot of people behind the scenes who help with quick costume changes and props and one of those people is our very own Ms. Krause,” said senior Natalie Hornkohl.

When asked if being in a musical is harder than it looks, most people had the same response:

“It takes a lot of mental strength to remember dance moves, harmonies, lines, and everything in between.” said Gelbs. “Once it’s rehearsed so many times though, it feels so simple, almost like a second nature.”

While being in a musical is hard work, there are some parts of rehearsal that simply more enjoyable than others.

“Personally, I look forward to all the dancing,” said Kryman. “I dance outside of school so getting to do it now in school is really great. Also I love all the people that are a part of it. Everyone is so positive and fun.”

One thing that everyone participating in the musical agrees on is how rewarding it is to work with the directors, the cast, and all the dedicated people behind the scenes who help make SHS musicals so memorable.

“We work so hard all the way through until the end,” said sophomore Maura Dempsey. “The moment when the lights come up for bows and you get a standing ovation is worth every single drop of hard work put into the show.”