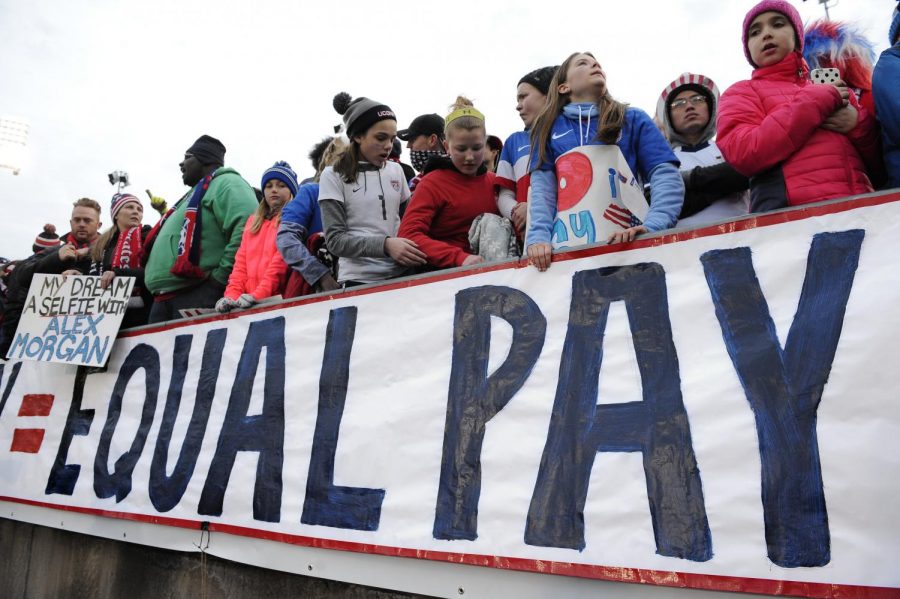 Women and men gathering to fight for equal pay and opportunities.

Equality and equity. Keywords used throughout all of human history, whether racial, ethnic, or in the topic of today’s opinion piece: women.

I present this question – are men and women truly equal in the workplace? Has there been an improvement over the years?  Or are things getting worse?

Let us start with a “then and now” look at the concept of equality for women. According to an article by the The Telegraph, several examples of the following was prohibited for women.

Serving on Jury (resolved in 1919 under the Sex Disqualification Removal Act).
Facing financial discrimination by high-investment banks (resolved in 1975 when women could open and operate bank accounts for the first time).
Denied service in a pub until a law change in 1982.
The 1970 Equal Pay Act sought to end discrimination in women’s checks for work, and the Equal Pay Amendment Act was passed in 1983 to officially change these rules.

These issues, as well as countless more, confirm that women have dealt with a significant amount of discrimination, obstacles, and challenges in regard to fair treatment.

Traditionally, in American life, women were often the caretaker of the house while the men were off to work, and the only time where that changed was when men were sent off to fight in wars – specifically World War II.

When they were home, however, women were often expected to be obedient to their man. There was a 1955 “Good House Wife’s Guide” that they typical housewife followed. Fast forward to today and clearly, many things have changed for the better.

For instance, according to the American Association of University Women (AAUW), there has been several pay gaps for women of all ethnic and racial backgrounds. Hispanic/Latino women have a 92% gap, while the white non-Hispanic women suffer from a 76% gap. Their pay is a far cry from the salary that men earn. Since 1995, the average gender wage gap narrowed from 28 to 20%.

Senior Dylan Haggerty does not believe the statistics accurately explain the gap.  He stated his opinion: “Statically there may be a gap in wage, but that’s not from men being paid more than women for the same job. It’s men competing and having more drive to work for those jobs and, by result, having an overall higher average salary. It’s just an unbalanced average.”

According to YouGov.co.uk, more than half of men (53%) have experienced a pay rise or bonus that’s NOT connected to a promotion, while only 40% of women can come close to those numbers. This extends to more than just pay in the workplace. The same article states that it’s estimated that six in ten men (59%) had the chance to take a hold of a project and show leadership, while only four out of ten women (44%) were provided this opportunity.

“With a male boss, they tend to stay at the top in regards to their gender,” said 2018-19 SHS graduate Melissa Rivera. “With a female, it’s spread more equally. Guys will either abuse their power or give more of a helping hand to the same gender or take them more serious, and the female is more just there than contributing.”

In addition, according to another article by Insight Into Diversity, it is estimated that women will finally achieve their share of equal pay in 2059. Women of color, though, such as African American women and Hispanics, won’t reach this milestone until 2124 and 2233, respectively.

In that same article, there are also other examples of unjustified pay. Take for instance one of the most egregious examples of the inequality in January of 2018, where it was revealed that the actor Mark Wahlberg was paid $1.5 million to re-shoot scenes for the movie All the Money in the World, while co-star Michelle Williams was paid less than $1,000. That was 1,500 times less than what Wahlberg was paid.

The inequity extends to more than just the pay. There are other invisible factors that prohibit women from certain positions. Whether this is women being kept from having higher paying jobs, restricting women from having a higher level of power in a job, or denied an opportunity of promotion.

“There is equity in the workforce, not equality,” said senior Conner Mahan. “From what I’ve read, women usually end up choosing the less profitable jobs and education paths. That ends up being a lot of the issue with this subject, because it’s hard to get equal playing ground if the genders don’t take the same paths or equal paths. It’s crazy how seeing things from another viewpoint can change a lot.”

Other voices who have been involved in discussions with students about the global issues in our world today have their own opinion to share.

“I think women have a chance to have an equal opportunity in this day of age because people are more aware,” said social studies teacher Ms. Susan Flad. “Some women are now CEOs, some worked behind the scenes, never getting the recognition. Teachers, regardless of gender, have equal pay for their education and years teaching. When it comes to big corporations, compensation may not be the same for women may be hired in positions formerly assumed by men.”

With all these statistics and barriers, as well as other responsibilities like being mothers and raising their own children with or without a father, the discrimination women face is undeniable.  The facts and statistics prove it.

However, there are several instances where things have improved for women. For instance, over the last 20 years, over eight countries have given the greenlight in having paid parential leave for pregnant wives. More and more women entrepreneurs have begun to run their own businesses, especially in places such as Nigeria and Uganda in Africa, and almost twice as many women hold political office today compared to 1995. However, there is still an overwhelming minority since women occupy only 22% of seats in national legislatures compared to 12% in 1997.

While the plight of women has improved in many ways, the bottom line is that it is not enough. The fact that women still are still treated unfairly in terms of money and morality is unjust and even unconstitutional.  The time for that to change is now — not in 2159, 2124, or 2233.

Here are the links to some of the articles and statistics researched on above, as well as a few new ones to get your mind thinking.
Equality in the Workplace: Are Women Treated the Same as Men?
Gender Inequality and Women in the Workplace
How Does Race Affect the Gender Wage Gap?
Women are less likely to be given opportunities or rewards in the workplace than men
How far have women’s rights advanced in a century?
Gender roles during the 1980s
This 1955 ‘Good House Wife’s Guide’ Explains How Wives Should Treat Their Husbands
Has Gender Equality Progress Stagnated In The Last 20 Years?