“You’re a Good Man, Charlie Brown” to be performed for free this Saturday

Senior Gabe Howard has lead role as the lovable blockhead! 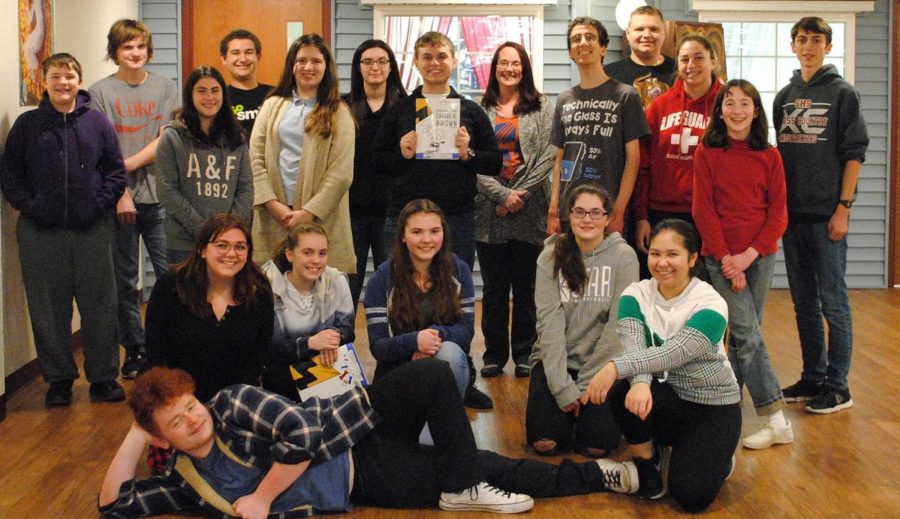 Anyone who grew up with the newspaper delivered to their front door knows about Sunday comic strips. Garfield, Zits, Family Circus, and many more have been a part of countless childhoods. Comics have been around for a long time, and they are not stopping anytime soon.

One comic series that continues to spark happiness for all is Charles Schultz’s Peanuts. The comic strip was created on October 2, 1950 and ran until February 13, 2000, with over 17,897 strips produced. Reruns were published afterwards, and it continues to be one of the most popular comics to exist.

Whether people grew up with the series, or reconnected with The Peanuts Movie made in 2015, they have a unique opportunity opportunity this Saturday — and it is FREE.  the Western Pocono Community Library cordially invites the public to come and watch the first ever Peanuts Broadway play in Monroe County, titled You’re a Good Man, Charlie Brown. There is only one performance and it starts at 12:00 p.m.

Gabriel Howard will star as the beloved Charlie Brown, with the story following him and his friends from several ‘Peanuts’ shorts in wacky scenarios. The rest of the cast consists of Amanda Lombardo as “Sally Brown”, Ambrose Cavalier as “Snoopy”, Ryan Berwind as “Schroeder”, Shyanne Rayne as “Lucy Van Pelt”, and Lorelai Simpson as “Linus Van Pelt”. There will also be a accompanying ensemble and several dedicated stage crew members to help out with props and setting the scene.

The play will be directed by Ms. Patti Weis, and will feature students from the area schools. Weiss has directed countless plays for the library’s “Storybook Theater” every year, since 2011.

“I went through several ideas until I finally decided to do a little ‘skit’ of one of Charles Dickens’ books,” said Weis. “From there, I fell in love with working with teens and directing, and Storybook Theater was born!”

When asked about the inspiration this showing, Weiss commented on how the director of the library was the main influence. “She has always been a Snoopy fan, and saw some artwork in New York in 2018, and wanted to do a ‘Snoopy play’. I researched and researched until I found this play!” Weiss also comments and say that this is the first musical that Storybook Theater has done, and wanted to put on a challenge for the teens there.

The library has produced several adaptations to existing properties, as well as original screenplays. Weis’s first ever play was of Oliver Twist, and her latest one in 2018 was Treasure Island. Her other works include Beauty and the Beast, a reading of The Phantom Tollbooth, and an original piece called CinderWho, combing the story of Cinderella and Cinderfella together.

“I am very laid back,” Weis said. “I am not am not a strict director. Fun is the most important thing. We have put on some amazing shows that brought the house down! I believe this show will be no different.”

For any further information, refer to the flyer attached to this article. While the performance is free, donations for the library will be accepted.