Cheating in the classroom increases in the digital age

In the end, students who cheat are cheating themselves 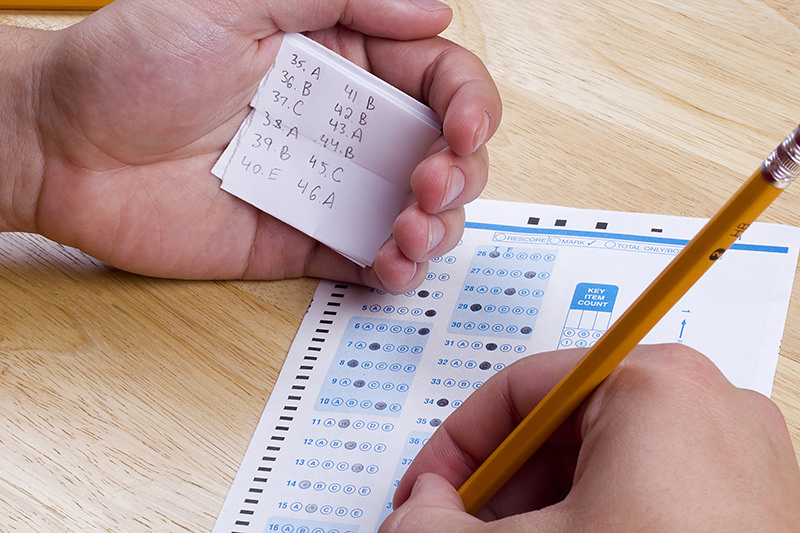 Photo via Flikr under the Creative Commons License

A student cheating on a multiple choice test.

You forgot to study for the big test that lays on your desk glaring back at you. You can feel your leg shake, as sweat beads up on your forehead. You sneak a peek to your left and catch a glimpse of the student who always studies.  Then, you tilt your head just a tad and shift your eyes just far enough to spot the answer to question number 7. You quickly copy down the answer. Guilt building up in your chest as you take that lonely march to the front of the classroom to hand in your test.

Cheating. It is basically plagiarism, the act of taking someone’s work or ideas and passing it off as your own. It has, and always will be, in the classrooms of schools at all levels. Practically everybody has either cheated or at least thought about it once in his or her life.

It is a seemingly easy way to get a good grade. For a variety of reasons, there are more opportunities to cheat and beef up one’s GPA.  So, is this kind of behavior happening more often than ever?

The answer is simple: Yes.

Cheating has shown to be getting worse everywhere. A study conducted by Josephson Institute Center for Youth Ethics found interesting statistics on cheating. Fifty-nine percent of high school students admitted to cheating on a test during the last year and 34 percent reported doing it more than twice. Years later a survey of 24,000 students showed that 95 percent admitted to some form of cheating.

There are a variety of reasons why students turn to cheating.

“I think students feel the need to cheat for a lot of different reasons like being under stress can make you desperate,” said junior Rhode Theodore. “Cheating is getting worse because our generation is under a lot more stress and pressure than before.”

Clearly, cheating is not going away any time soon. Students who choose not to take this route tend to get frustrated with those who do.

“I think it’s unfair that some people put in their time and effort into trying to get a good grade while other people slack off and use the easy way to get good grades,” said sophomore Thomas Mathiesen.

Polls conducted at Fordham University, have shown that cheaters have a 3.41 Grade Point Average (GPA), whereas the average of non0-cheaters is only 2.85.

This statistic is staggering.  Obviously, the students who play fair have a right to be upset. They study for hours and try their very best in their classes, only to score lower than students who didn’t put the same work and effort.

“I think students feel the need to cheat because they either have no time to study due to extracurriculars or personal issues, or they would rather spend their time watching Netflix or scrolling through Instagram,” said sophomore Isabella Contino. “At this point, cheating is the only answer in their eyes.”

Yet cheating doesn’t come without serious consequences — if a student is caught.

Schools have implemented rules and consequences for students who are found cheating. Once caught, these students are sometimes frowned upon by their peers, as well as their teachers.

Obviously, instant access to online resources can make it easier for students to cheat.  Not only are they cheating on the test, but they are cheating themselves out of an essential skill in life: critical thinking. What’s even worse is that studies show that students who cheat in school will likely cheat in the workplace.

Perhaps the most effective change made at SHS to help curb cheating is the new cell phone policy.  Students are required to turn their phones in at the beginning of every class.  This prevents them from craftily looking up information during test-taking. Thus, students must rely on old school cheating.

“We don’t have the ability to keep our phones any more during classes but students still cheat by looking at their classmate’s exam who are sitting by or near them.” said sophomore Mehrin Hossain.

Overall, cheating has gotten worse and will always be an easy way for some students to earn good grades. Though they may not admit it now, they will find out that, in the long run, they are really cheating themselves.

“The world is filled with people who want to succeed through their own work and people who want to succeed but without putting any effort into the success they desire,” says senior Kendall White. “There will always be cheaters, it’s sad to say but it’s true. A lot of people seek the easy way to success but later on it will catch up with them and sooner or later they’re going to fail.”

It would be better for everybody if they simply put the work in themselves and earned the grades the old fashioned way: through hard work.