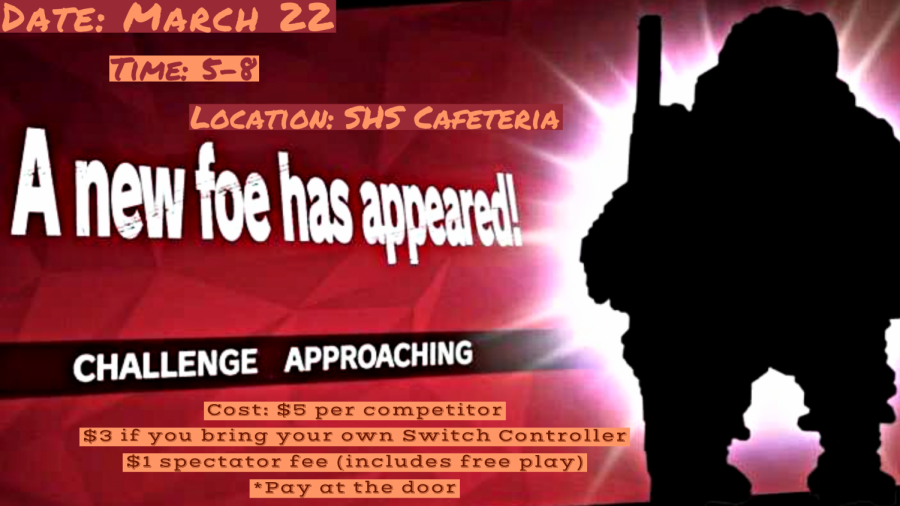 All-out brawls, battles to the death…what more could video enthusiasts ask for? Well, ask and you shall receive.  Students should be ready to go to battle at the first-ever Super Smash Bros. tournament, which is coming to SHS this Friday, March 22 from 5:00 p.m. to 8:00 p.m.

The event will be run by two SHS juniors: Justin Buynak and Taha Vahanvaty.

“Each match is eight minutes long with three lives,” said Buynak. “There’s going to be a winner’s and loser’s bracket.”

The game is about players selecting a wide variety of video game characters from several franchises to battle to the death in an all-out brawl.

“Super Smash Bros. Ultimate” is the brand new video game released by Nintendo in December, 2018 for the Nintendo Switch.

“I want to achieve a good enough outcome to do this for many years to come,” said Buynak.

Seeing as though the latest title, “Ultimate”, came out on the Switch, this will allow several people to battle on-the-go and in the home!

For the past few weeks, Buynak and Vahanvaty have been hyping this up as the ultimate fighting tournament. Move over wrestling, baseball, or football – this is going to be one of the most adrenaline-pumping experiences ever!

More information is provided on the flyer located below.