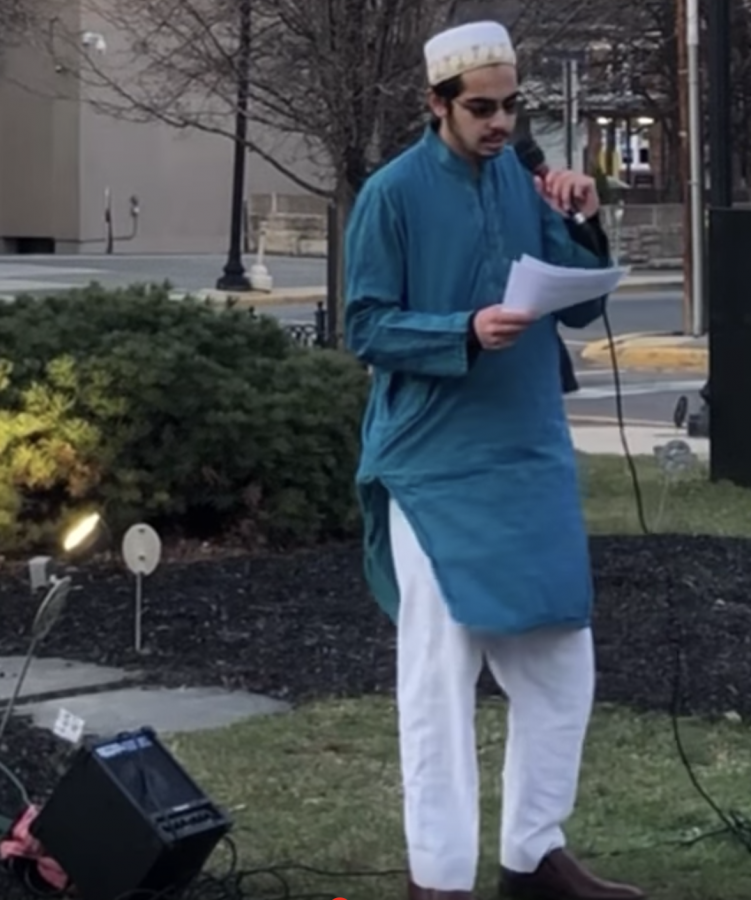 Taha Vahanvaty speaks at the "Move Forward as One" event.

On the day of March 15, 2019, two mosques in New Zealand were attacked. The tragic results were 50 deaths and dozens of injured.

The attack was considered one of the deadliest mass shootings ever in New Zealand. The attack was unleashed at lunchtime local Friday, when mosques were full of worshippers.

Before the shooting took place, a rambling manifesto laced with white racial slurs was published on social media just before the shooting unfolded. In addition, the footage of the massacre was streamed online.

Last Saturday, March 23 from 6:30 to 7:30 p.m., many people gathered at Courthouse Square in downtown Stroudsburg to pray for the victims of the shooting and families or friends who lost their loved ones.

The event called ‘Moving Forward As one’ was organized by SHS sophomore Taha Vahanvaty. “When I heard about this event, I was shocked, angry, and frustrated; I didn’t know how to put my feelings into action. When I saw other communities in the United States holding vigils to honor the victims, I felt inspired to do the same thing.”

After reaching out to the community and many local organizations, more than 100 people showed up in the freezing cold to honor the victims.

“I organized this event through my club ‘The Acceptance Project’ in coordination with Monroe County United, (NAACP), Pocono Indivisible and The Stroudsburg Islamic Center.” said Vahanvaty.

During this event there was hymns sung in Hebrew, Arabic and English. Following this they had a line up of speakers from different backgrounds and faiths. These guest speakers came from many organizations in Monroe County, including Monroe County United, the NAACP, Indivisible Poconos, the Stroudsburg Borough Council, and much more.

“These violent acts have names attached to it, and it’s not right at all. We know about racism, racial slurs, discrimination and white supremacy— and all that has affected our way of living, and has forced a lot of us to turn our backs and close our doors to each other,” said Tom Jones, President of the Monroe County Chapter of the NAACP.

Many of the people who attended felt that the event was a powerful and positive way to show their support.

“It was encouraging to see more than 100 community members participate in this important event,” said senior Alefiyah Vahanvaty. “This shows how in the end, humanity unites us.”

“The vigil although small, was a perfect piece of remembrance of those who tragically died in the attack,” said junior Harpreet Chohan. “Very cold, miserably windy, and in the middle of a small town, it is a tribute to mankind that people persisted in coming and honoring the victims.”