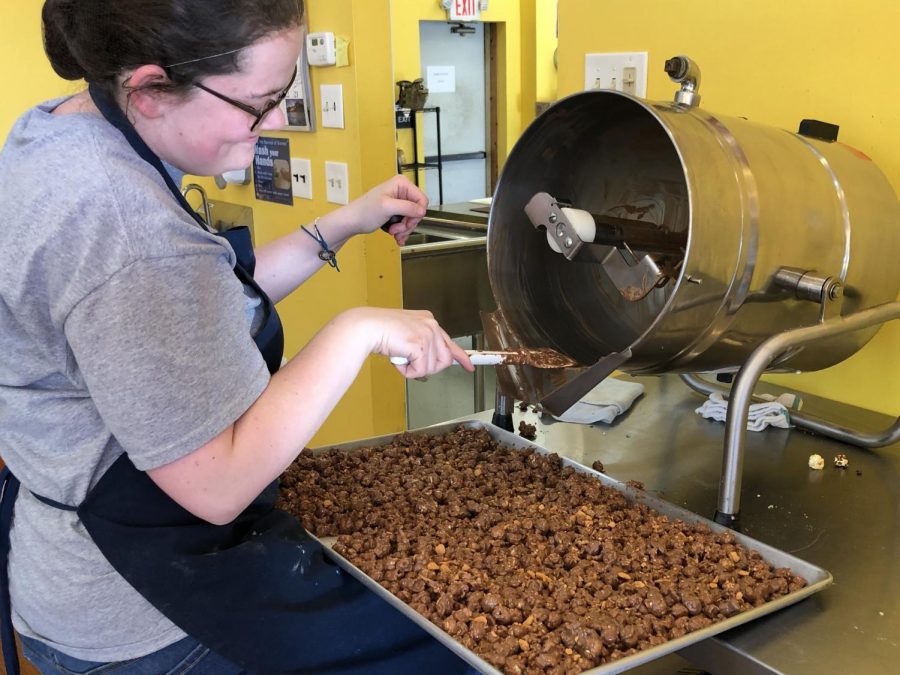 During the month of March, you may have seen Mountaineer staff members carrying around a giant, stylish giraffe. Well, you want to know his name?  It’s Ralph, of course. He was part of just one of several fun contests that the Mountaineer decided to hold to promote the newspaper’s version of March Madness.

Ralph was dressed head-to-hoof in clothes that mostly came from SHS’s thrift store, Common Threads. He had a huge sign around his neck that read ‘take a quick pic with Ralph’ along with more details about the contest. Ralph paraded around the school and posed for a photo with anyone who asked. People were amazed that they could win free popcorn just from taking a silly pic with a jazzed up giraffe!

The popcorn is not just any popcorn.  It is specialty popcorn and it was generously provided by the Popcorn Buddha, a unique local business located at 480 N 8th St, Stroudsburg. Mr. Craig Campeotto, the founder of Popcorn Buddha, operates the business with his wife Tanya DeMaria. Both are SHS graduates

Campeotto shared his thoughts on working with his alma mater’s venererable newspaper, the Mountaineer.

“I’ve been working with the Mountaineer off and on for years and I’ve always enjoyed it. I have learned something everytime,” states Campeotto.

The giraffe and popcorn contest was a huge success.  Over 100 SHS students and staff jumped in front of the camera to pose with Ralph.  Check out this fun photo gallery Many of the participants won gift cards courtesy of Popcorn Buddha.

Working with Popcorn Buddha has been rewarding for the Mountaineer staff, as well.  Campeotto recently visited the journalism classes and discussed the challenges of running a small business.  He compared the staff’s newspaper challenges to his own.  They shared their ups and downs — as well as some delicious popcorn.

“Craig has always supported us,” said senior Gabrielle Buchanan. For the three years I’ve been in the class he is always there when we have contests.”

The Mountaineer contests are designed to promote not only the newspaper, but the local businesses that support it. Most of the gift cards cards come from local businesses. Popcorn Buddha is one of those generous businesses.  The Mountaineer and Popcorn Buddha have collaborated numerous times.  They donate plenty of prizes to give out to the students of SHS and also promote the newspaper in their own business.

In past years, wacky contests also have also been designed by Mountaineer staff members. For examples, the staff has held word scrambles, a lollipop guessing game, and a “caption this photo” contest.  None has topped this wild safari through the halls of SHS.

”Entertaining, fun and amusing are three words that I would use to describe Ralph,” said junior Brianna Mydosh.

“Sean Pickett and I would think of ideas, things that were happening around school and base the contests off of them. The more relevant and time oriented, the more likely people would want to do them,” said Hank.

The Mountaineer strives to connect with the students and staff by providing fun contests to enter in order to win amazing prizes.

“Seeing everyone participate in the Mountaineer’s contests makes me feel more a part and connected to the school.” said sophomore Raven Reid. “I was especially excited when I found out I won one of those contests.”

The Mountaineer’s most recent and currently ongoing contest is their Comment Contest.  Students or staff simply have to comment on a story in order to be eligible to win a prize.

Stay tuned for new contests or maybe your favorite one from last year will get revived!

You can read another article about Popcorn Buddha here. It was written by sophomore Cassandra Oppelt, a staff reporter.

Also, be sure to check out Popcorn Buddha’s site at this address: https://www.popcornbuddhausa.com/