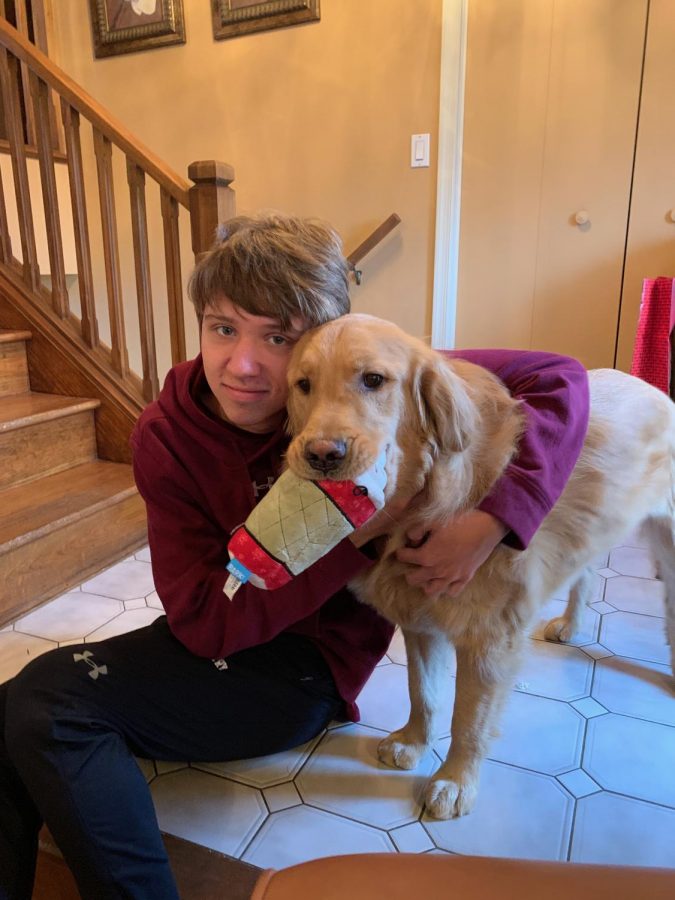 Justin with his dog Cooper.

Tell me a little bit about yourself – what’s your name, where you’re from, etc.?

On the outside, I’m just an average sophomore just trying to get through high school, but the inside is way more complicated. I would like to think that I am a good person who tries to give it their all with something they are truly passionate about. Currently, my name is Justin Buynak, I am 16, and my birthday is 2/10/03.

Where do you want to go for school after high school?

You’re a bit popular in the school for hosting that Smash Brothers tournament. Why do you levitate so much towards video games?

The Smash Bros. Tournament was a lot of fun to host, and I can guarantee that it will be even better next year. The reason as to why I chose to do a Smash Bros. Tournament instead of something else, was because e-sports is a new, rising sport that is neglected in many high schools. It gave people that really have a passion for Smash Bros. a chance to express it and show the fruits of their labor.

What are some of your hobbies? How did you get into them?

Some of my hobbies include playing video games and running. I’ve been playing video games since I was really young, but if I had to say who got me into them, it would have to be my brother. My brother introduced me to Super Smash Bros. Melee for the Nintendo GameCube before I even knew what a controller was. So let’s just say I had a fun childhood. One of my other hobbies is drumming; it’s a lot of fun to play music with others, and I recently joined a band (we don’t have a name yet or I would’ve shouted us out).

Ultra Instinct Shaggy, because his power was so great, his meme was revived earlier this year. I just find it so funny that they took Shaggy and gave him one of the most powerful transformations in Dragon Ball Super. His power is so great that mere mortals can’t even fully comprehend it.

My favorite type of food has to be potatoes; I will literally eat potatoes with anything, they’re too good.

From an objective perspective, I have to say that The Legend of Zelda Breath of The Wild is the greatest game of all time. From a subjective perspective, I have to say that this game is truly a master piece and what all games should strive for. This is gameplay where your skill as the player is tested almost all the time. Every situation always has more than one answer, and the world feels like an immersive world. The story is decent, but this is one of the most innovative games of all time, and it has inspired many pieces of art/games. I could talk all day about how great this game is, but just know that if you never played a game before in your life, you must try this one.

What is something that you have learned in your childhood that has stuck with you?

You’re the protagonist of your own story, but just know that there are 7 billion other stories happening at the same time as yours.

Trash Collectors. They have to collect your trash, and your trash smells terrible. Plus they have to do it early in the morning, I truly feel bad for those guys.

Why is 6 afraid of 7? Because 7 8 9. I don’t really find it funny anymore, just I think that it’s a very witty joke that doesn’t get enough credit.