Accomplished Southern Band to perform at the Sherman Theater

Special student discount pricing; and a chance to win 2 free tickets through Instagram! 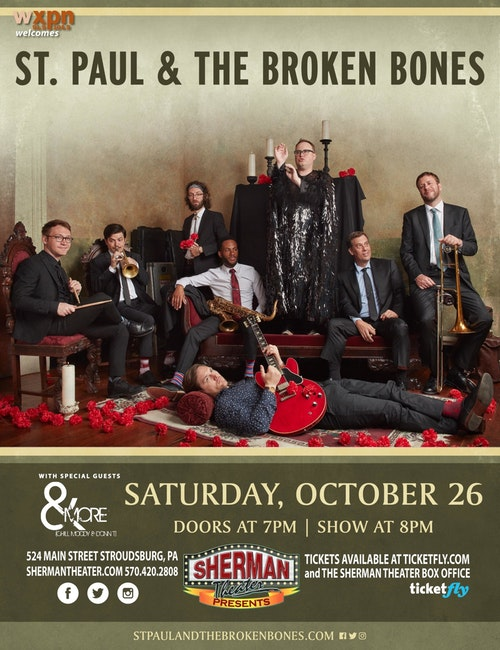 In case you wondering where you can find great music at a special price in downtown Stroudsburg, the band St.Paul & the Broken Bones has an answer for you. The southern band sensation will perform at the Sherman Theater on October 26 with the doors opening at 7:00 p.m. and the concert starting at 8:00 p.m.

For those interested in popping on down, the Sherman is also offering a discount to all high school students who show up at the door with their student I.D. To further spice things up, the Mountaineer is giving a pair of FREE tickets to see this band perform. All you have to do is comment on our Instagram to be entered into the raffle to see this band preform.

St. Paul and the Broken Bones specializes in Soul, R&B, and Jazz, and is comprised of a powerful southern eight-man lineup featuring drums, keyboard, trumpet, trombone, and of course, saxophone. The band formed in 2012, releasing their debut album Half the City in 2014 and its follow up, 2016’s Sea of Noise, to much recognition. Their musical talent helps shoot them toward the national spotlight, and the band worked hard to prove they were no mere retro-soul band. The band has toured the world, opened for the The Rolling Stones, and appeared on TV late shows such as Stephen Colbert, Jimmy Kimmel Live, and the Late Show with David Letterman.

“St. Paul & the Broken Bones will be here in a large part because a member of our community simply inquired about this show,” said Sherman Development Coordinator Ms. Brenda Block. “We are always looking to bring new bands and entertainment right here to the Poconos.”