This team knows how to entertain audiences 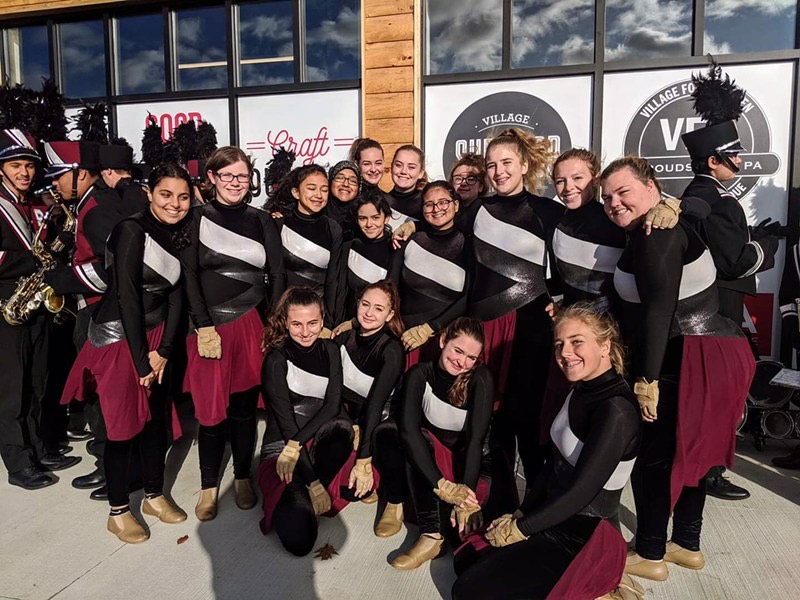 Color guard before a performance

It’s a chilly night at the weekly football game. Flags are flying and twirling, elaborately coordinated dance moves align into perfect lines. This is Stroudsburg High School’s color guard.  This team is one of a kind.

Color guard is a team of dancers who are skilled in staying coordinated, twirling flags, and throwing the flags skillfully into the air. Members of color guard learn to throw and catch items like ribbons and rifles, along with flags. It takes much more than than one might realize.

“We have two clinics for rookies in March where we train new members,” said junior Ammaarah Hassan. “Both clinics are a week apart on weekends, and at the end of the second one we have auditions.”

Being in color guard is almost as rigorous as marching band, evidenced by the fact that the team even attends band camp. During the last two weeks of August, the team and marching band go to a camp to prepare for the season.

If you ever see any members of the color guard, they’re bound to be together with other members.

“Everyone is so involved,”said senior Buffone. “For all our practices, we stay together, eat and go out, making us close. We bond through color guard.”

From the beginning, in the way some members join or first get involved, color guard includes being with close friends. When asked what might make one join color guard, junior Ammaarah Hassan remembers one of her own memories on the subject vividly.

“It’s a funny story actually. Two of my friends were arguing about whether marching band or color guard was harder.” her friend in the marching band agreed to go, and Ammaarah decided to tag along. “We went to the clinic and it was so fun! I actually tried out! I’ve been in color guard ever since, and I love it!”

The team performed with the marching band during the half-time show at Metlife Stadium last Saturday, November 9.

If students are interested in joining color guard, they should out for the spring clinics and be sure to join!

For more information on color guard, check out the following links: