Americans feel as though they are drowning in disasterous daily news

Teens, turned off by news, need to find a way to tune in again 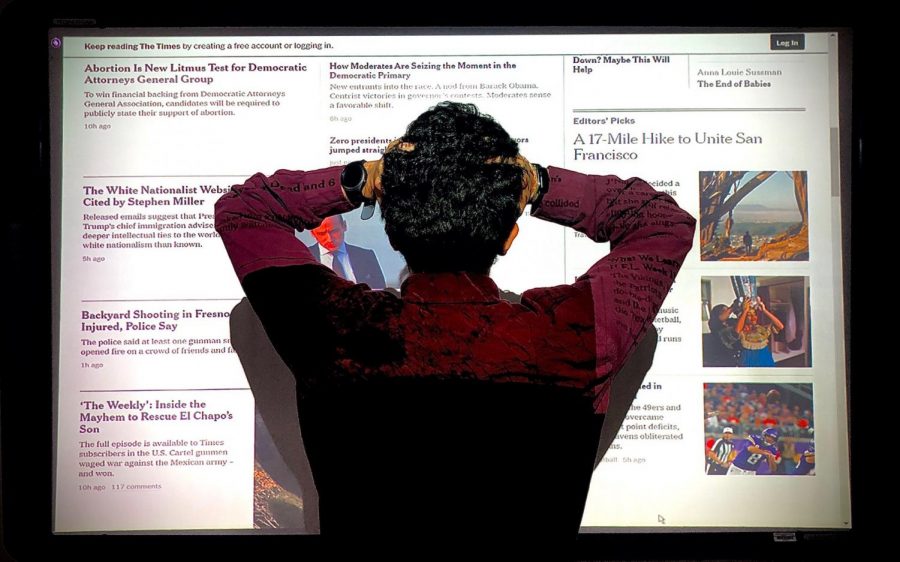 Students get overwhelmed by the continuous disastrous news.

More than half of Americans say that watching and reading the daily news causes them stress.

These same people report feeling fatigued, anxious and overwhelmed after learning about the state of the world. Yet, one in ten adults checks the news every hour, with 20% of American adults reporting that they are “constantly” monitoring their social media feeds — which often exposes them to the latest news headlines, whether they like it or not.

The reason people continue to digest news they don’t want or like is because it is socially desirable for them to claim that they are effortlessly well-updated. However, it progressively becoming more and more difficult for Americans to keep up with the relentless updates of the modern-day news cycle.

The hard truth is that most of the world’s calamities or disasters are not just not a priority for American students. It is not a matter of them being cold and heartless, but as high schoolers, they have to deal with their own life troubles before they move on to worrying about the rest of the world.

Since the onset of the internet and social media. the news has become far more intense than it has ever been.  It’s literally at the tip of millions of American’s fingers, every single time they lay their hands on a device. Whether it is a mass shooting in California or an economic catastrophe in Haiti, people are constantly being bombarded with the updated calamities of the world.

“I have six different news APPS on my phone and every five minutes something bad is popping up,” said junior Ryan Scott. “It just gets to a point where I have to delete it because it’s just negative stuff all the time.”

On top of the overwhelming number of current events, students also must navigate the misinformation and ‘fake news’ that plagues our society.

“The reason I find it overwhelming is that nowadays I have to constantly sift through my news source and figure out what is and isn’t fact,” said junior Cate Fergusson.

Just when it seems information is needed most, it proves to be elusive to many students. The rise of social media and the spread of misinformation online are leading to a general sense of exhaustion with the news itself. Many teens have become numb and disoriented, struggling to discern what is real in a sea of fake and fact.

Yet, despite all of these challenges, there is a persistent feeling among some students that being updated on the news is every teen’s responsibility no matter what.

“The news is like medicine,” said senior Jake Oravec. “It may be bitter to take it but at the end of the day it is a necessity.”

The reason this medicine is so difficult to swallow is that people naturally want to avoid negative feelings or distance themselves from problems that seem too perplexing to fathom. It’s because they feel helpless, and believe any type of potential solutions are insufficient.

However, students can fight that sense of helplessness by simply being shown that their opinion matters.

“If people feel like their opinions don’t have any weight in the world or county they won’t care,” said Ferguson. “But if we can show them that they do hold weight, only then we can really create a change.”

While teens are confronted with life’s disasters and tragedies on a daily basis, there should always be an underlying effort to at least try to find out what is happening in the world. “While you may not be able to become interested in everything you should at least try to empathize with something in the news,” said Scott.

It is common sense that being well-informed about the news is something all students should strive for. Yet there is a balance between being informed, and being overwhelmed, and in this day and age, that line is becoming more and more blurred.

However, there are several sources on the web that offer a little clarity to that blurry line. News sources such as The Learning Network, YR Media, and Knowhere are amazing resources to help students fit current events into their life without societal guilt or added stress.

Getting students involved in current events and the news is a process. It requires a societal effort to adapt the information to the lives of a teen. The solution to getting students more informed is not to guilt them or shove the information down their throats. It is to simply show them that their opinion matters, and that their voice no matter how small can create a change.