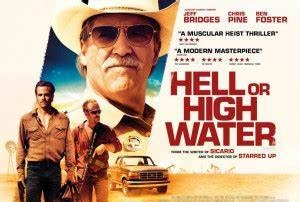 Photo via WordPress. The cover for the movie Hell or High Water.

Westerns are arguably the most American of all film genres. Most follow a simple, yet effective formula. Middle aged, white cowboy hunts down outlaws, or an outlaw goes on a daring string of bank robberies. Hell or High Water (2016) follows into the latter category.

While Hell or High Water does everything you’d expect from a western, it also separates itself from the average western by setting it in modern times, which is unique to the genre. The vast majority of westerns made in recent times have taken place in the past. Django Unchained, True Grit, Bone Tomahawk, and The Hateful Eight are all examples of popular westerns that take place in the past.

Hell or High Water follows a pair of brothers (played by Ben Foster and Chris Pine) who go on a string of bank robberies to support their poor family. The movies also follows two cops (played by Jeff Bridges and Gil Birmingham) who are actively trying to hunt down the two brothers.

The setting makes the film fresh and unique because all the characters are easy to relate to and identify with. You can understand and sympathize with the brothers for trying to support their family, but you can also support the cops for trying to do their job and serve justice. It is harder to identify with westerns set in past times because the characters aren’t as relatable.

“The setting is what makes [Hell or High Water] so unique,” said Stroudsburg junior Bob Broussard. “The characters were more believable and their actions made more sense.”

Hopefully we are able to see more westerns set in present times in the future. Comment below your opinion on westerns.