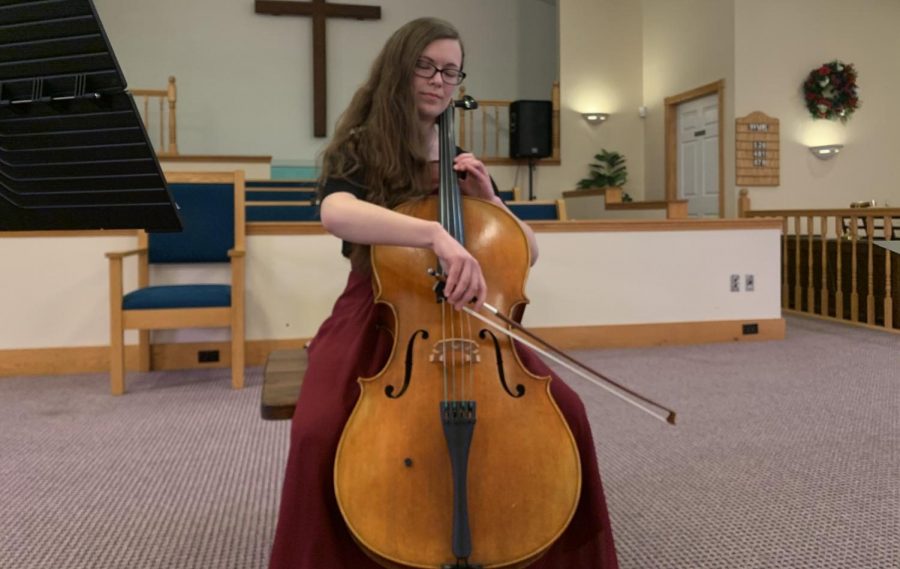 The event was held on December 7, 2019 at Parkland High School. High school students from District X were judged by how they performed in these auditions. The students earned their ranking based on the score they receieved.

Music has always been a big part of Mathiesen’s life.

“My family has always been really musical. My dad is a concert percussionist and professor and my sister is a violinist and public school music teacher, so I sorta knew from the start that I would end up on this path,” said Mathiesen.

She started playing the cello in fourth grade and took private lessons in sixth grade. It wasn’t until the summer of 2018, when she went to the Eastman Cello Institute, that she opened her eyes to the music world.

Mathiesen is very serious and passionate when it comes to music. Nowadays, she practices two to four hours per day. She attended North Carolina this past summer to play under Boston Pops conductor Mr. Keith Lockhart at Brevard Music Center.

“I am extremely happy that she is finally being recognized for all of that hard work,” said Rogers. [Liz is] one of the hardest working students with whom I have had the pleasure of working [with]. She has taught me a great deal and her skills are way beyond where mine were at her age.”

Beyond getting first this year in districts for cello, Mathiesen has been to districts twice, is the principal cellist of the Pocono Youth Orchestra (PJSO), the Young People’s Philharmonic of Lehigh Valley, and all of Stroudsburg High School’s string ensembles. She also teaches cello to middle school children.

“I’m most proud of my own cello students,” said Mathiesen. “I’m the regular teacher of one middle school student, as well as the occasional teacher for a few other younger members of the PJSO. It makes me so proud to see them succeed. I hope to keep teaching throughout my music career.”

In terms of future plans, Mathiesen wants to get a doctorate in cello performance and she also wants to teach cello at the college level. She also enjoys composing music.  Currently, she is composing a piece for the SHS Hall of Fame Concert this spring.