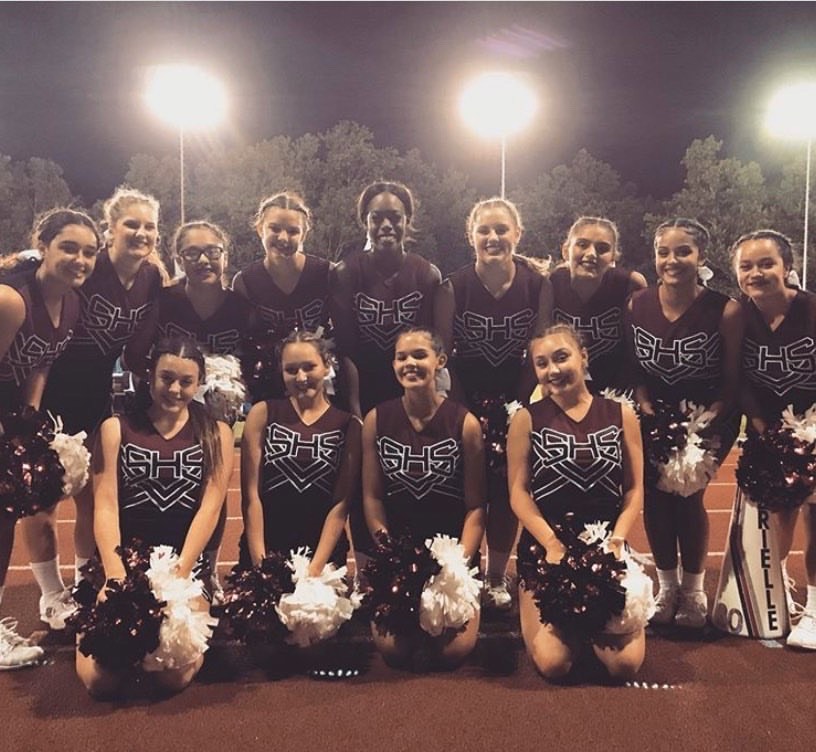 SHS Cheerleaders at a football game

“Placing second was an exciting feeling for us,” said senior Deja Spears about placing in both districts and states. “We got more than what we expected. Making it to day two was a huge accomplishment for SCA (Stroudsburg Cheer Association), as it is only the second time in Stroudsburg’s history.”

So just how does the team get to where they are now? Through their two and a half long practices three to four times week, the team runs through their two-and-a-half-minute routine multiple times. Come competition time, practice is more rigorous and full of non-stop athleticism, skill, and technique.

With such rigorous routines full of flying, flipping, and synchronization, one begins to wonder: how does the team build that much trust?

“Trust for the stunts is built upon the bond that cheerleading provides for the athletes,” said head coach Mr. Frank Ems. “Their routine this year was choreographed by the Pennsbury cheerleading varsity cheerleading squad’s head coach Sarah K. D’Agostino.

As a team, both flyers and bases must understand and support each other in order to successfully complete moves and routines. In the beginning of the season, coaches are sure to encourage team bonding and becoming a family in order to build trust. Instead of a set captain, the seniors act as leaders for the team.

Cheerleading is one of the most challenging sports available at Stroudsburg High School, according to Ems.

“They have to be able to tumble, jump, and stunt all while engaging the crowd and being the spirit ambassadors for the school,” said Ems. “Despite being ranked the sixteenth sport with most injuries, many people do not recognize cheerleading as a sport for a variety of reasons including the fact that teams do not directly compete against one another.

Spears believes many don’t think of cheerleading as a sport because they’re often seen cheering on teams at games and matches.

“People are unaware of how hard competitive cheerleading is and I inform them of the accomplishments our competitive spirit squad has achieved,” said Spears.

To those who believe cheerleading isn’t a sport, Ems encourages people to try it. Cheerleaders are required to do so much more than what people’s perception of cheerleading is.

“I know many athletes who have played other sports and joined cheer and say it’s one of the hardest most demanding sports they’ve ever tried,” said Ems.

Spears credits the head coach with helping in so many ways.

“Coach Frank has really made this program have a huge turnaround in such little time,”said Spears. “Without him I wouldn’t be an All-American cheerleader or be applying to be on NCA staff this summer. He has also helped connect me with many coaches in the cheerleading world, so I can pursue my dream as a Division I athlete. The program has really been thankful for everything you do for us and we are all excited for nationals in two weeks. Go Mounties!”