"I have to return some video tapes" 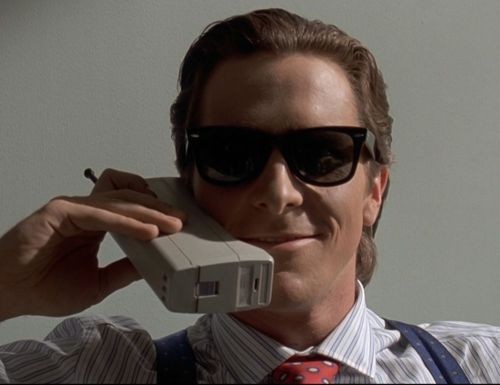 *SPOILER WARNING FOR THE FIRST 29:30 MINUTES OF AMERICAN PSYCHO*

Co-written and directed by Mary Harron, the film paints Bateman as a stereotypical wealthy man living in New York City in 1987. He’s snobby, greedy, fit, and struggling with homicidal tendencies. At one point, Bateman even confesses he is completely devoid of human emotion except for “greed and disgust.”

And that statement is what the movie plays on the most. Bateman’s unemphatic disgust of people who aren’t as successful or wealthy as him. The movie is complemented by narration from Bateman, putting his aporophobia on full blast. It provides an interesting insight into the character’s rationale and also a goldmine of dark comedy.

While Bateman hates people who he considers inferior to him, he’s obviously extremely envious of people who are more successful than him, especially one of his co-workers, Paul Allen (played by Jared Leto).

Before a meeting, Allen casually mentions that he has an “8:30 res at Dorsia.” Dorsia is an extremely high-end restaurant, only the most elite of people can manage to get a reservation there. Scenes before this show Bateman trying to place a reservation at Dorsia, but they are always out of room. Bateman is clearly bothered by the fact that Paul Allen can get a reservation there but he cannot.

One scene shows Bateman and some of his other co-workers in a meeting room, comparing business cards. Narration from Bateman lets the audience know that he is very confident in his business card, thinking everyone else’s cards are inferior to his own. That is until Allen reveals his own business card, which Bateman confesses in his narration that he is jealous of. This enrages Bateman to such a degree he takes it upon himself to murder a homeless person and his dog.

This entire sequence is satirical gold. Bateman is so obsessed with maintaining a wealthy and successful image, he’s driven to murder when he meets someone who is more successful than him. Even Bateman’s victims, a homeless man and a dirty dog feed into his burning disgust for “inferiors.”

Shortly after this, Bateman is attending a Christmas party. When he notices Allen is there as well, he convinces Allen to go out for dinner with him. Bateman intentionally gets Allen intoxicated so he can bring him back to his apartment, where he murders him with an ax.

Without any context, this sounds like a situation lacking any sort of comedy. However, it’s actually one of  the funniest scenes in the movies. Everything in Bateman’s apartment is shades of white and gray, everything is amazingly clean. Even the ax he uses to murder Allen is chrome.

Before Bateman kills Allen, he delivers a hilarious monologue about the deep and poetic meaning of Huey Lewis’s Fore! album. This leads to one of the most famous scenes in the film, where Bateman plays Lewis’s song “Hip to Be Square” as he murders Allen. The absurdity of Bateman explaining a cheesy 80’s pop album before killing Allen is easily one of the most iconic examples of black comedy in film history.

Of course, this is all brought together by an amazing performance from Christian Bale. His ability to be an obviously unhinged serial killer yet absolutely hilarious is unmatched. He was clearly the perfect choice for the role.

“I couldn’t imagine anyone else playing Patrick Bateman” said junior Aseem Chaudhry, “His performance was great.”

Have you seen American Psycho? Maybe you think there was a better actor to play Bateman? Comment below!