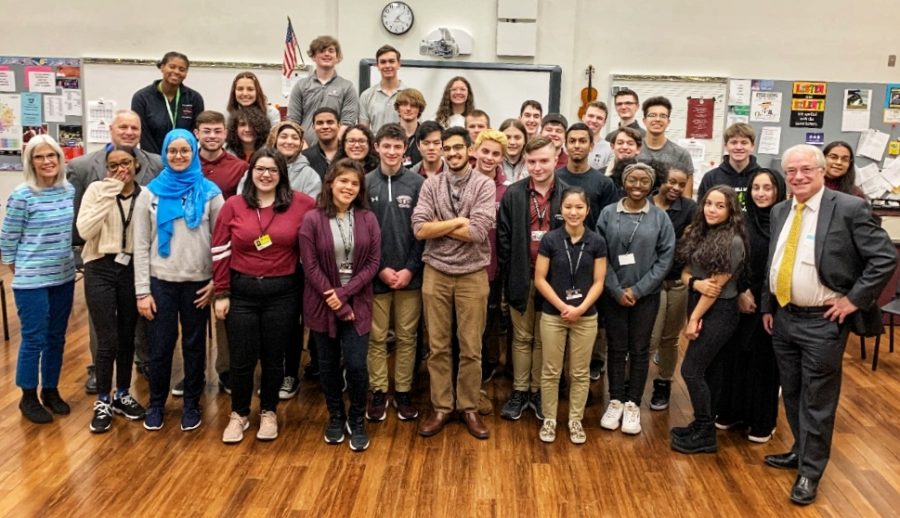 Communication. The lack of communication between individuals has grown more and more throughout the last decade due to the increase in social media and technology.

Yet, with The Acceptance Project, the topics discussed allow students to not only communicate with each other but to listen to what they each have to say and not leave a voice unheard.

On February 20, 2020, Executive Deputy Attorney General Robert K. Reed (Pennsylvania) visited The Acceptance Project at Stroudsburg High School. The topic of the week’s meeting was centered on privilege and the nuances that surround this controversial topic.

Reed’s first reaction at the end of the meeting was one of great satisfaction.

“Given the times it was amazing, and it was amazing because the dialogue was so kind-hearted and respectful and it’s not what you see a lot in our society.

It was an honor for the SHS students to have a special guest as accomplished as Reed join them. His background is impressive. After graduating from the University of Pennsylvania with a political science degree, he majored in international affairs at the London School of Economics. He then returned to the United States and completed his law degree at Boston College Law School.

Reed quickly became widely known and well regarded by legal, government, and community organizations across organizations, which ultimately led him to his current position as the Executive Deputy Attorney General of Pennsylvania.  Over the past several years he has directed numerous programs to address violence prevention, prisoner re-entry, and community outreach initiatives, all of which have been used as models for the United States Department of Justice.

Throughout his career, Reed has also made it a central focus to try to bring individuals from different sides together.

“Relationships are critical.” said Reed, “and in order to create a relationship you need empathy and that is exactly what’s happening here in The Acceptance Project.”  Despite visiting many different schools across the state, Reed mentioned that none of them quite compared to The Acceptance Project and the goals the club holds.

“The conversation held here was so rich,” said Reed. “You can feel that the students listen with the need to understand and the desire to take it to the next level.”

Reed shared that he would love to see other schools incorporate this club into their schools and allow everyone to have a great opportunity to share their views and beliefs. Yet, in order to have a unique club like The Acceptance Project, it must have a certain person with specific values to lead this club and to facilitate it.

“This is who he [Taha] is, he is a facilitator,” said Reed. “He wants to bring people together and really wants to engage the student body in conversation.”

Vahanvaty has been working hard on exactly that. Through the summer camp program “TAP into Summer”, he seeks to provide every student in Monroe County with an opportunity to learn how to develop and lead The Acceptance Project back at their own high schools.

“Dialogue is the only way we can move forward as a society and nation,” said Vahanvaty. “We need to prove to students that they can have these challenging conversations, and we need to prove it to them now.”

At its core, The Acceptance Project allows students to not only interact with each other but to grow together. It is a place where every opinion, every idea, every belief, every side, and every voice has the opportunity to speak, and more importantly, an opportunity for them to listen.

Check out our previous story on TAP into Summer here