Which Democratic candidate should you vote for in the primary?

The Democrats are damaging their party through their negativity 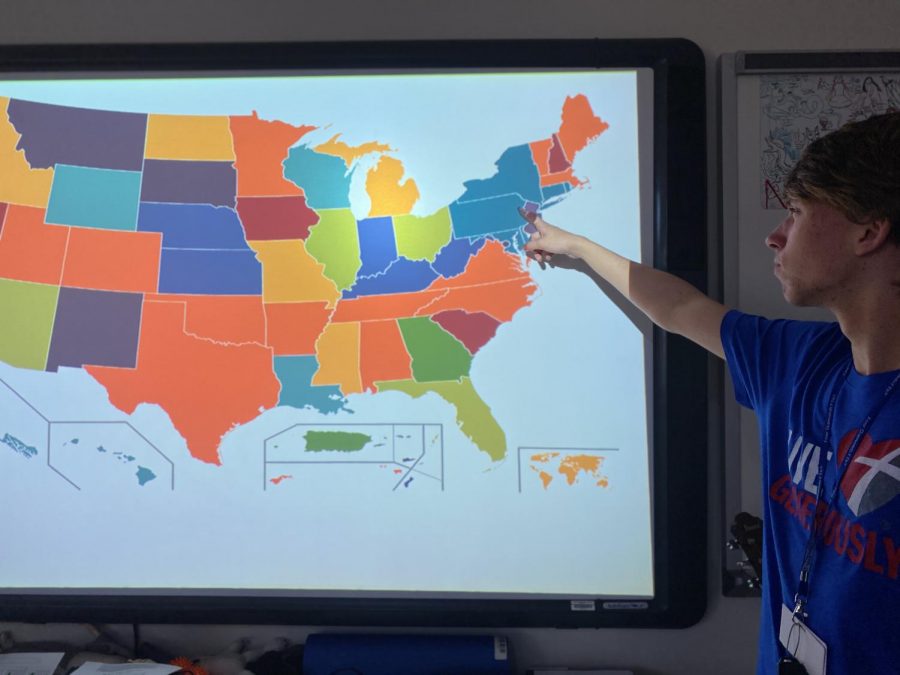 SHS Junior Justin Buynak points out certain states still up for grabs in the democratic primary such as Pennsylvania.

Now that the dust has settled, let’s take a look at who is left standing in the democratic primary. This article will explore each candidate’s background to create a better understanding of who they are and if they are the best candidate to lead this country. Our goal is to provide you with information that may help you when choosing a candidate.

The current candidates are Joseph R. Biden Jr. and Bernie Sanders. These two candidates could not be more different from one another and might as well be from two separate parties. A summary of these candidates’ achievements and key issues are outlined below (see bottom of story) to help grow an understanding of who they are and what they stand for.

Public support between these two candidates has been inconsistent and erratic.

Bernie only won four states including Vermont, Colorado, Utah, and California. This means that Joe Biden has emerged as the front-runner in this primary and has become a serious contender against Bernie Sanders. Both have over 600 delegates and need to reach 1,991 delegates in order to secure the democratic nomination. On March 10, Sanders only won North Dakota with Washington being too close to call at present.

The winner of the Democratic primary will not only represent the party for the next four years, but also face President Donald Trump in the upcoming general election.

The primary is a heated battle between two sides of the Democratic party, the Social Democrats and the Moderates. The competition between the two has turned nasty during debates and may be considered unprofessional as compared to debates in the past.

There is a lot of criticism from people who just want what is best for the country.

“I am a big hater of negative campaigning,” said social studies teacher Mr. Shawn Thornton. “I hate the fact that it’s almost become the norm that we have to bash the other person rather than just talk about your own stuff. I never think it’s proper to bash the other side. It’s always been bad and that’s part of the problem. We have a short memory. We love to compare if it’s worse now or then, but it’s really hard to compare.”

Due to the increasing number of heated arguments during debates, some people are questioning the character of these candidates as legitimate leaders. According to Roll Call, the social democrats have shown nothing but negative traits and bad headlines flooding the media as they continue to bash other members of their own party and even show hypocrisy.

Biden has done no better. According to the New Yorker, Biden is struggling during debates and is even stuttering and hesitating on his words. Seemingly the other candidates like to directly question him because he makes a fool out of himself and has a hard time defending his policies. He has even gotten into an altercation with one of the Iowa voters during the caucuses.

The Democratic party has become divided because of their poor demonstration of leadership, and if neither can unite their own party how will they unite our country? Can anybody lead our country?

Junior Taha Vahanvaty, who has worked on various political campaigns in the past shared his views on who he believes will be the best Democratic choice.

“Joe Biden.” said Vahanvaty. “Some may say he is just another part of an institution and government that has failed us before. To that I say, he might be, but for me what’s important is that this country does not need a liberal version of Trump. While the change some of the more left-leaning candidates promise is not negative, we have to come to terms that the quote on quote revolution they speak of is not representative of how every single American feels. We need someone to bring the country together from all different walks of life. I believe Joe Biden has the best shot of doing that.”

“Policy wise for me is Bernie Sanders and not that I agree with everything he says,” Lanfrank said. “I always vote for three things: my job, healthcare, and the environment. I think his plans are the best to fix those issues. Voting my job is something I’ve done for 16 years. To me, healthcare should be available to everyone and everyone should have the basic level of care. If that means I should pay more taxes so you can go to the doctor and not worry about it, then I’ll gladly pay more taxes. You shouldn’t have to go bankrupt to receive healthcare.”

Perhaps the ultimate deciding factor is not their policies or issues, but who can beat Donald Trump?

“Anybody is beatable” said Lanfrank. “You just have to find the right combination of policy issues and campaigning to win. It’s all about building the right organization and campaign to win. Anybody can lose.”

Who should you vote for in the upcoming primary? Take a look at the information below and make your best educated decision.

Current Senator from Vermont.
Self-proclaimed “Democratic Socialist”.
Bernie Sanders may be a familiar name. He ran for president in 2016 and fell short as the runner-up to Hillary Clinton. He has returned for another shot at the presidency.
Bernie’s Issues

Wants to create a shift in the energy system to 100% renewable energy and create 20 million jobs.
Universal Healthcare free for all.
Increase in income taxes and a new tax on the stock market.
Reinstate DACA, the dreamer program to protect children who came here illegally to America along with their parents.
Cancel all student loan debt and make tuition affordable for all. Debt-free college plan.
Increase the unionization of the workplace by doubling the current number. Guaranteeing the right to unionize.

Wants to rebuild the middle class.
Aims to rebuild good relationships on the world stage.
Expand Obamacare and its policies to more Americans.
Wants to include everyone in democracy.
Prison reform and abolishment of the death penalty.
Bring an end to the current opioid crisis that has plagued our nation for quite some time.
Keep our obligations to veterans and provide them with the help and care they need.
Grow our community colleges and further secondary education in order to provide education to all.