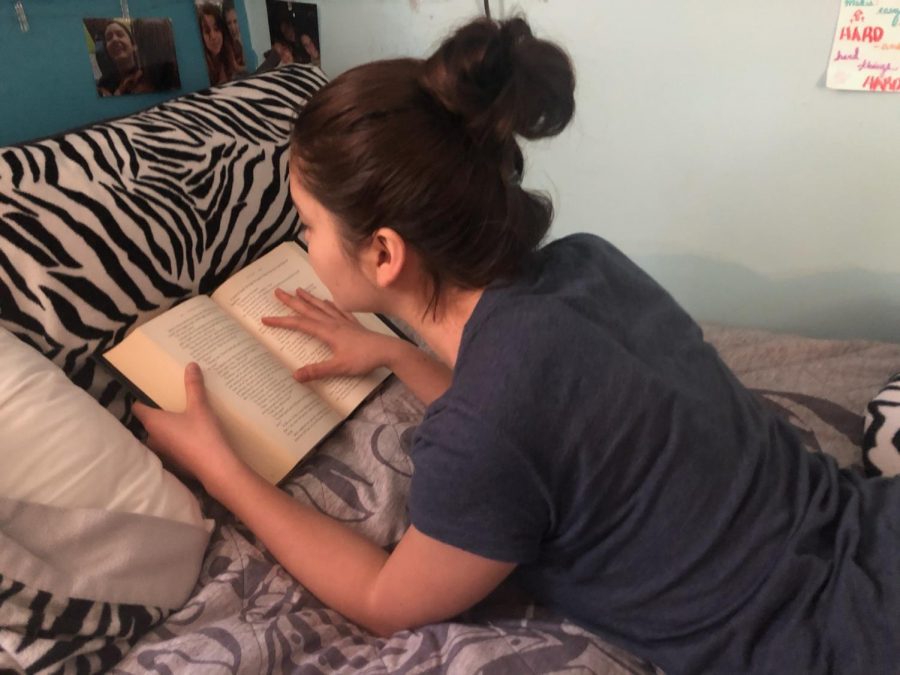 The student is sitting on her warm, crimson bed sheets, staring up at the ceiling, fully knowing that today will be another day wasted. She looks around the messy room, searching for anything even remotely comforting or interesting to do. She finds nothing.

Another day in quarantine, another day of boredom. Boredom is almost unavoidable. It’s a state of mind that will never disappear from life altogether. Yet it is also a feeling that can be easily lessened by constructing a meaningful daily schedule, a few daily routines, or some healthy habits. Simply getting out of bed can sometimes be the cure.

In these times, however, getting out of bed is harder than usual. The world is in a state of quarantine. This not only means more time to think, but also less motivation.

“I feel as if quarantine is reducing my motivation to do daily tasks and most tasks in general,” said junior John Michael Weeks. “Not having that clear cut structure that school always made me conform to has definitely taken its toll.”

Many students across the country are feeling this way. Clearly, the quarantine is affecting more than just people who have contracted COVID-19.  It has taken its toll on the general population’s mental health, as well.

Studies have scientifically shown that social isolation greatly affects general mental health. Social isolation is twice as negatively impacting on mental and physical health as obesity, according to a meta-analysis co-authored by Julianne Holt-Lunstad, a professor at Brigham Young University.  Not only this, but also a study from BMJ journals found that social isolation can produce a 30 percent increase in one’s chances of obtaining coronary artery disease and stroke. The study’s authors mentioned that this is a product of more stress, less sleep, and unhealthy lifestyle habits.

“All our systems, including social, psychological and biological, have developed around social groups and interaction with one another,” stated Zlatin Ivanov, a New York-based psychiatrist, in Insider. “Social isolation in most cases would bring the negative effect of loneliness, anxiety, and sometimes depression.”

Holt-Lunstad even mentioned, in an article by the American Psychological Association, that the welfare of humans may largely be affected by their level of social interaction. “Being connected to others socially is widely considered a fundamental human need – crucial to both well-being and survival,” said Holt-Lunstad.

Junior Bryanna Morykan has experienced negative feelings of her own from the social distancing. She also noted here friends are feeling similarly.

“I’ve been feeling the effects of social distancing more than ever these past few weeks,” said Morykan. “I miss everything I took for granted before. Quarantine gives too much time for everyone to get in their heads.”

In a Review by The Lancet, more participants in the study had depressive symptoms in groups that had been quarantined than in those who had not. They also found that groups had higher anxiety and anger issues during and directly after quarantine than they felt a few months later. They attributed this in large part to a loss of structure in their lives.

“A structure and routine is definitely important to me because if I don’t have one, then I’m kind of wondering what to do aimlessly,” said Weeks.

The research and writings of Mariana Plata, a psychologist and mental health writer, support this position. According to Plata, routines positively impact mental health and correlate to less chance of conditions such as addiction, depression, bipolar disorder, etc. One of the types of routines most common and influential in daily lives is morning routines. They provide structure, a positive start to the day, and increase productivity. For more information and ideas towards building a morning routine, visit:

A morning routine can start the day off positively for people, but routines can be put into place for any time during the day. Some may prefer to put into place some journaling after lunch, following a jog, while others may prefer a nightly routine. Routines are most commonly individualized. For inspiration and ideas, visit:

Another aspect of maintaining a healthy day-to-day structure is practicing healthy habits. Healthy habits are behaviors that benefit physical, mental, or emotional health. They are often linked to discipline and self-control; however, some are easier to implement than others.

For example, junior Amber Pintarich said, “I’ve been trapped in the house for weeks, [but] I try to exercise every day to stay fit. Plus, it helps reduce stress.”

Exercising at home can promote self-esteem as well as releases endorphins to the brain that helps with staying alert, awake, and happy. For other healthy habits to start, work on, or continue, visit:

Life-Changing Habits for Body and Soul

Healthy habits and tricks along with positive routines and schedules can be very effective when executed properly. While this article is targeted towards teens, it relates to anyone. Staying true to what’s best for the individual is the overall message.  That should help each person more effectively achieve his or her goal.