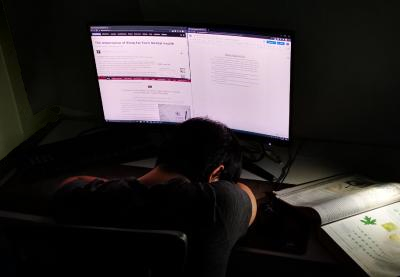 Teenager falls asleep as he is working on a school assignment

Here’s the bottom line: sleep deprivation is killing your brain.

Teens across the United States suffer from the effects of sleep deprivation, which has a significant impact on a teen’s well-being and cripples the brain.

It is imperative that teenagers get at least eight hours of quality sleep because of the role that sleep plays in the growth of teenagers and brain development.

“When you sleep, that’s when the synapses in your brain are most active and that is what leads to your memory becoming sharper and your brain simply becoming stronger,” said Dr. Ramlah Vahanvaty, a pediatrician at St. Luke’s Pocono Pediatrics in East Stroudsburg.

The Center for Disease Control surveyed high school students across our nation and came up with alarming results: 72.7% of the students do not get enough sleep each night.

Sleeping for less than the recommended time leads to a great number of complications, which include poor brain function, physical health, and emotional health.

Poor brain function affects the ability to think, focus, and retain information. These, combined with feeling tired, can result in potentially fatal conflicts such as car accidents.

Physically speaking, sleep is a major part of recovery. If a teenager has poor physical health, then his or her growth will be negatively affected.

Poor emotional health brings side-effects, such as fatigue, stress, depression, feeling unmotivated, and more, which affect a teenager’s performance throughout the day.

“All that’s in my mind is how to schedule my day so that I can get more sleep,” said remote senior Ivan Ruan. “There really isn’t much motivation. It’s hard to roll out of bed on some days.”

A lack of motivation as a result of sleep deprivation can prove to be detrimental to a teen’s success in high school and can lead to other issues such as poor time management.

“I’d say my biggest challenge is finding the motivation to do work,” said remote senior Aaron Garza. “I spend way more of my free time on the computer ever since remote learning started and most of the time I just feel tired.”

There are many different factors that contribute to sleep deprivation, such as a teen’s sleep schedule, school work, classes, extracurricular activities, insomnia, and jobs.

However, one of the biggest factors is how early school starts. Students at SHS wake up as early as 5:00 a.m. Clearly, most teens do not go to bed at 9:00 p.m., thus, many do not get the necessary number of hours of sleep in order to perform their best.

Schoolwork is another major contributor to sleep deprivation. Many teenagers spend countless hours completing assignments. On top of that, they have tests to study for, which could potentially result in a huge decrease in the amount of sleep they get.

Furthermore, some teens participate in extracurricular activities and others have jobs after school, which means that they won’t be home until later on in the evening. In addition, teens still have the task of completing their schoolwork or studying for tests, which leads to staying up even later.

As a consequence of having immense workloads, some teens must come up with ways to approach their situation. Many high school students agree that having an organized schedule can be very beneficial. A schedule allows teens to utilize their time more efficiently, which in return could help with getting more sleep.

At the end of the day, teenagers should really consider meeting the requirement for the amount of sleep needed. Although Ruan struggles with sleep deprivation, he agrees with this claim.

“Yes, they definitely should,” said Ruan. “There is a wide array of negative things that can stem from something that seems so simple and really harmless and it’s just not worth it.”

Unfortunately, as more and more teens get less sleep, sleep deprivation has become a colossal issue. If you would like to learn more about the dangers of sleep deprivation, check out the links below.

For more information, check out these links: