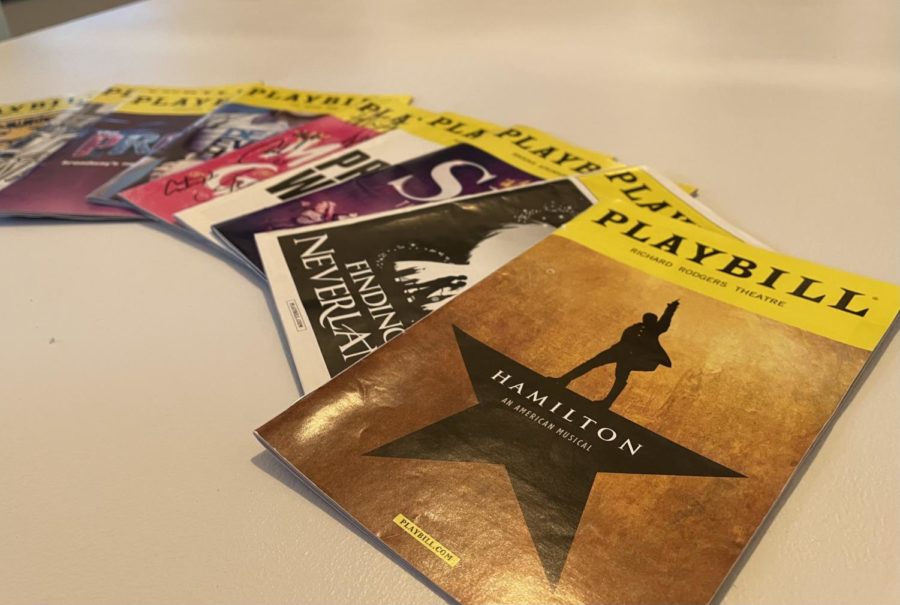 Pre-pandemic, people had to opportunity to go see Broadway shows live and collect their Playbills.

It is set to reopen May 30, 2021, but the date has been continuously pushed back as the pandemic goes on. The 96,900 people that it supplies jobs for have been doing their best to get by as the arts industry takes a hit from the coronavirus.

Many people have been deprived of the opportunity to experience Broadway productions, which are considered elite performances.

Theatre can provide an escape from everyday struggles, so during an especially difficult time, it is important that people still have access to the shows they love.

“Broadway is a really big part of people’s lives, including mine,” said Ethan Flanagan, ‘23. “So when everything shuts down what do you do? You have to find another way to experience them.”

Thanks to streaming services, people can watch and listen to almost all of their favorite shows, or even discover new productions.

Broadway Proshots can be found on many streaming platforms, including DisneyPlus, BroadwayHD, Amazon Prime Video, and Netflix.

Broadway HD is a streaming service specifically for Broadway musicals and plays. Here are a few examples of titles that can be found there:

She Loves Me: A romantic comedy about two co-workers who hate each other, but do not know that they are each other’s pen pal.

Joseph and the Amazing Technicolor Dreamcoat: A comedy about Joseph, the favorite of his father’s 13 sons, and his journey throughout Egypt caused by his jealous brothers after receiving a technicolor coat from his father.

Into the Woods: A baker and his wife go on a journey to break a witch’s curse, combining traditional favorite fairy tales along the way with a darker twist.

DisneyPlus also offers a couple of popular Broadway musicals. Here are a few shows that can be accessed on this site:

Hamilton: Set during the founding of America, this mixture of hip hop, R&B, and traditional Broadway-style music tells the story of the rise of Alexander Hamilton out of poverty and his impact on the American government.

Newsies: Set in 1899, Newsboy Jack Kelly leads a strike against Joseph Pulitzer’s New York World after he raises the price of the newspapers.

Netflix offers the Proshot of Shrek: The Musical, while Amazon Prime Video has The Spongebob Musical.

Instead of filmed Stage productions, there are many movie musicals adapted from Broadway shows. These can be found on DisneyPlus, Netflix and Amazon Prime Video.

Hairspray: Set in 1962, a plus-sized girl named Tracy Turnblad chases her dream of being a dancer on The Corny Collins Show, while battling racism.

The Prom: A modern-day love story about a girl who fights for her right to take her girlfriend to the prom with the help of four Broadway actors.

West Side Story: A Romeo and Juliet-inspired musical about two rival gangs, the Jets and the Sharks.

Annie: Set in the 1930s, an orphan in search of her birth parents escapes from her orphanage when the rich Oliver Warbucks invites one orphan to spend some time living in his home.

Theatre fans can discover new musicals as well as listen to all of these on Spotify, Apple Music, and YouTube.

Here are a few recommendations that are favorites of mine:

The Prom: See above.

Legally Blonde: Based on the 2001 film, this fun musical follows Elle Woods on her journey from Los Angeles to Harvard.

“We all act every day,” said Choir Director Mr. Christopher Hamm. “We go to a job interview and act like we’re always professional. We wake up early and act like we aren’t tired. We go on a first date and pretend we have no flaws.”

Discovering new musicals can be a doorway to another world in which you don’t have to act. You just have to observe other people acting and their reactions to things.

The hope is that these Proshots, movie musicals, and soundtracks will keep the theatre as alive as possible while people wait for Broadway and theatre to reopen.

Below are links to discover new musicals: