Gabriella Mohring recently became certified to be a volunteer EMT 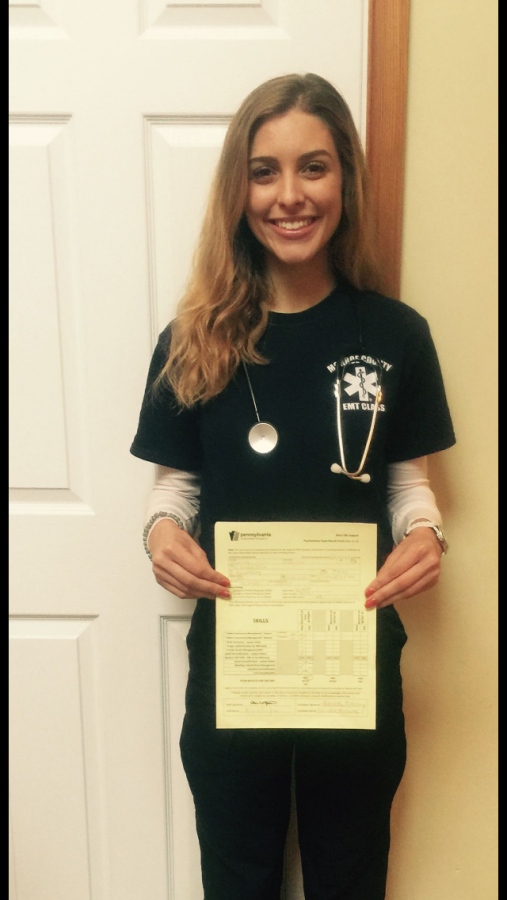 A 911 call comes in and the ambulance siren responds, flashing red as it speeds through town, alerting everyone of its urgency. Ai??In the back of the ambulance, volunteer EMTs (Emergency Medical Technicians) wait and prepare themselves for the difficult task at hand: saving someone’s life. The woman they are helping is bleeding out due to her dialysis cap getting ripped out, and the EMTs must be very careful since she was taking a blood thinner and can’t be given a high flow of oxygen. Ai??In a matter of minutes, the bleeding is stopped and the patient is safe.

This was Gabriella Mohring’s first experience as an EMT.

“It’s crazy because you never know what kind of a situation you’re going into,” Mohring said, “It would be a minor cut or the patient could be bleeding to death.”

Mohring is a junior at Stroudsburg High School and secretary of SADD, junior captain of Science Olympiad, FBLA regional secretary, and a member of environmental club, student government, history club, and NHS. She went through five monthsAi??of EMT training classes to “increase my medical knowledge and to foster my goals of becoming a physician.” Ai??Training classes are offered at the Monroe County Public Safety Center Tuesday and Thursday from 7:00 to 10:00 p.m.

The class size begins at typically 40 people ranging “between 20-40 years of age. Some are older and occasional younger as well. The bulk would be about 20 to 30.” Approximately half of the students drop out of the class, some because it’s not what they envisioned, while others just fail out, according to safety center employee Mr. Bruce Henry.

“We’ve been doing this [EMT classes] at the facility since 2000,” said Henry, “Before that they were done at the vo-tech school in Bartonsville.” All the instructors for the class are either EMTs, paramedics, or other state certified 911 responders.

“You can see how relieved the patients are when you come to help,” Mohring said, “Stay committed because the process is long and difficult. . .it is really rewarding.”