Students put the fun in fundraisers

It's go big or go home with these ideas

Within the classrooms of Stroudsburg High, busy mindsAi??are creating seemingly outlandish ideas to raise money for their cause. Ai??Tired of the normality of bake sales and car washes, students are proposing events never seen before at our school. Ai??Through the various ideas being collaborated and supported, fundraising has never been more enjoyable for participants.

Last year, new fundraising events were createdAi??such as Moeai??i??s Night, where half the profits of Moeai??i??s restaurant would go to Stroudsburg, the Spring Fashion show, and the first annual Mini Thon.Ai??This year, it continues with added fundraising games such as the senior classai??i??s Humans vs Zombies Night.

ai???Mostly the students came up with the idea.,” said senior class treasurer Abby Stein. “They came up to us and said this would be a cool idea, and then we we were all talking about it. We raised something like $700.ai???

The idea was a simulation of a zombie apocalypse, much like AMC’sAi??popular show The Walking Dead –Ai??creating the terrifying scenario of being locked in the dark halls of our school. Almost everyone began as a hunter, armed to the teeth with Nerf guns, until there was only one survivor left. Ai??Referees would guard dead ends and send the infected hunters to the gymnasium to become zombies. The dimly lit hallways were filled with the soundtracks of horror movies to create panic and fear among the survivors, along with the invincible roaming Phantom, a zombie that could not be killed.

Restrictions were created as the game progressed and were announcedAi??by senior class president Woody Battle over PA system. Ai??Announcements would include things such as Ai??”hunters must evacuate the second floor” or that “hunters can shoot each other.” Each of the three rounds would begin with, ai???There can only be one survivor. Good luck.ai??? The feeling was like being in the Hunger Games, if President SnowAi??decided to use zombies. 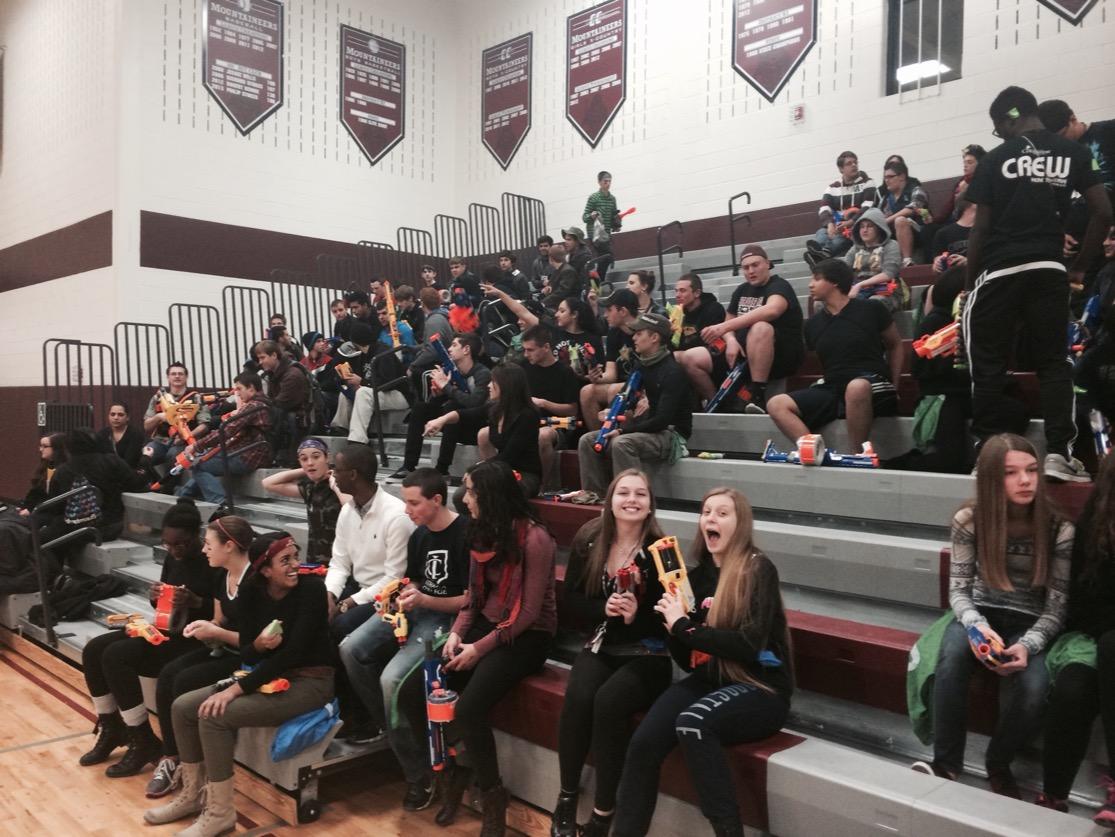 ai???I had better luck and better performance as a zombie,”Ai??said junior Eric Wolf.Ai?? “IAi??would say, Ai??you can really cut loose more; thereai??i??s less stress. But being a hunter, it was really thrilling because youai??i??re constantly on edge. I viewed it as two totally different games.ai???

At the end of each round, the few remaining survivors would gather in the cafeteria where they had a few minutes to finish each other off before dozens of zombies were flooding in through the doors. If a winner could still not be made out, then an old western duel took place in the middle of the gym where the last two or three survivors took ten steps away and drew their Nerf guns.Ai??This senior class fundraiser was a haunting success and sure to happen again with all the zombie fanatics and apocalypse survivors in the school.

Senior class president Woody Battle seems to have an admiration of the Hunger Games since he has created a fundraiser solely based on the book series where one tribute from each club and class participates in mental and physical challenges until only one remains. Tributes can bypass challenges by meeting the quota of money they must raise per week. Ai??The winner of these games will receive some of the overall profits to their activity and the rest goes to the senior class.

“I think it’s a really great way to raise money for both the senior class and the clubs while encouraging team support,” said junior Mackenzie Schoeller, a tribute for Creative Writing club.

Student Government has added their own, more humorous way to raise awareness Ai??for the second annual Mini Thon, dubbing the known book Whereai??i??s Waldo to Whereai??i??s Waleed, that combined two things everyone in the school enjoys: selfies and junior Waleed Elsakka. The well known SHS student stopped to take pictures with students in the hallways, raising a dollar per picture. Ai??Again the idea was a group collaboration.

ai???It was pretty fun. We raised like $130 or what not,ai??? Elsakka said. ai???I think it just happened because my name sounded right for the job.ai???

The club SADD (Students Against Destructive Decisions) will soon be adding their creative ideas to the schoolai??i??s agenda, with their long awaited Sumo Wrestling Tournament. Ai??The plan is to have students pay to climb inside inflatable sumo suits and fight in a ring like the actual wrestlers. Ai??It will be organized by weight class so someone 200 lbs wonai??i??t be battling someone 110 lbs. The event will most likely happen after school, although the officers are pushing for it to be during school hours. Ai??This idea has been waiting along time to arise, according to SADD vice president and senior Brian Wisbaur.

ai???Tommy [Rubino], our president, had the idea freshman year, and he has not been able to really do anything about it until now.”

SADD will have other upcoming events such as students paying a dollar per swing to smash a car with a sledge hammer and aAi??video game tournament happening Ai??Friday, March 27. Ai??Although both ideas are approved by the principle, the process to initiate one is easier than another.

These ideas would never come to light without the help and approval of the faculty. Ai??The advisers for these clubs as well as SHS principal Mr. Jeffrey Sodl have all been very cooperative and agreeable to the studentsai??i?? proposals.

ai???Itai??i??s refreshing for me, and I think the groups that are coming through recently have been new with their ideas,ai??? said Sodl. ai???There are so many ideas out there. I think the students are able to bring things from outside [their daily lives] and tailor them to be appropriate.ai???

Although Sodl is supportive of these ai???big-ticket items,” students know they have to mold their ideas into a school environment in order to prevent their ideas from being squashed. Officers of these clubs may stay up long into the night just to perfect their plans before presenting them to the principal.

ai???I would never go to Mr. Sodl without every detail worked out, “said W. Battle. “I was up until 11:00 last night finalizing an idea Iai??i??m presenting this afternoon.ai???

Why are students more open and expressive with their ideas than before? Are these fundraisers finally able to become a reality due to the students or the faculty?

ai???I think what it really is, is a lot of people coming together with good ideas,ai??? said Mr. Andrew Kurnas, Student Government adviser. “The [Mini Thon]Ai??committee and fundraising committee have really good leadership and [are] great people to be around and so creative and thatai??i??s what I think it is. Itai??i??s that atmosphere that they create and in those meetings, together, they just come up with it and its very comfortable for them to do that.ai???

With at least 50 clubs and activities at SHS, other groups are sure to step out and bring their out-of-the-box ideas to the principal’s office and for the entire school to enjoy. Ai??Students are able to take more pride in their school by taking part in fundraisers and activities, whether it be collaborating or participating in these events.