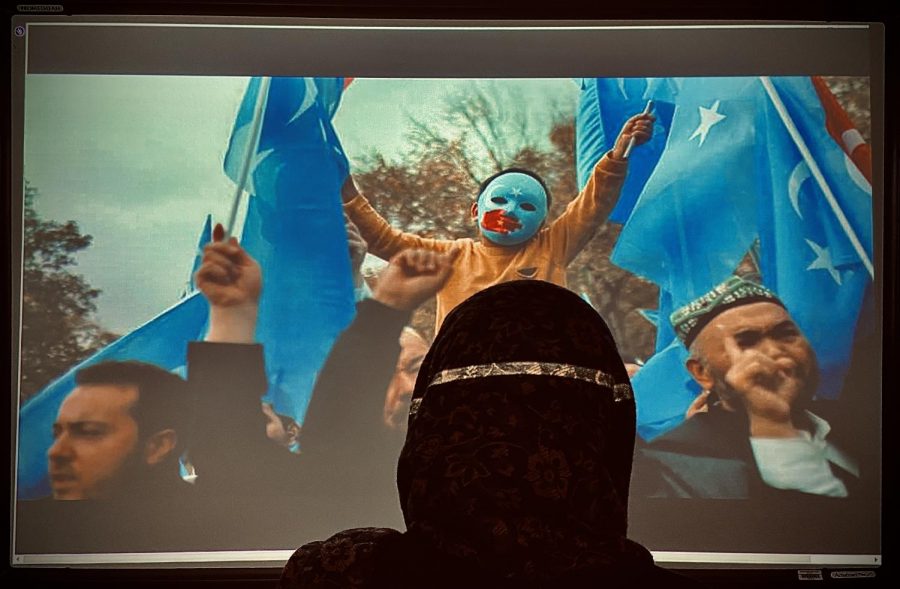 Junior Yasmine Alrefai looks up at a recent headline featuring protests against the Chinese imprisonment of Uigher Muslims.

Uighur. Pronounced wee-ghur. It’s a word that is most likely alien to the tongue and minds of most students in Stroudsburg High.

The Uighurs are an ethnic minority that currently resides within the western region of Xinjiang, China. They are a Muslim minority numbering around two million, with their own food, culture, history, and language; and they are being systematically wiped out by the thousands.

China has struggled for decades to take control over Xinjiang, where Uighur Muslims have been fighting their strict policy and rules. However in 2014, after being attacked by Uighur extremist militants in the capital of Xinjiang, China’s President Xi’Jinping launched what he called “The People’s War on terror.” In an interview with CNBC, China’s President Xi’Jinping declared that the “cracking down on violent terrorist activities must be the focus of China’s current struggle.”

Chinese officials began justifying harsh security measures and religious restrictions as necessary to fend off terrorism, arguing that Uighur Muslims were susceptible to the influence of Islamic extremism. They established a “patriotism” penalty point system in which Uighurs would have points added to their “rap sheet” if they were caught following certain tenants of their faith. If a Uighur was caught fasting, then they receive 50 points, if they were caught praying, they would receive 100 points, and so on and so forth.

“From the Chinese government perspective the Uighur Muslims were a threat to their national security,” said social studies teacher Mr. Shawn Thornton. “However I don’t think this was true at all.”

In 2016, the crackdown intensified dramatically after Xi named hard-line Communist party boss Chen Quanguo,  as Xinjiang’s new head.  Following his appointment, he developed a network of internment camps built to forcibly detain Uighur Muslims in an attempt to wipe out their identity through systematic indoctrination. 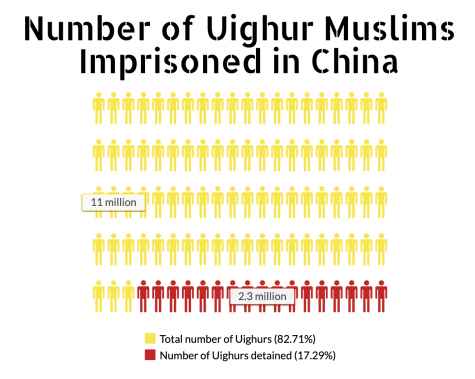 Beijing doesn’t deny the camps exist but rejects the notion that they are committing cultural genocide, calling them vocational training centers to contain religious extremism. Chinese officials argued that the new security measures taken for Uighur Muslims were ultimately for the safety and well-being of the Uighurs.

Looking back at history and learning from our previous actions, dehumanizing and ignoring what was happening to the Jews led to the Holocaust, and that exact problem is happening right now in China”

“I think it’s important for everyone to know what’s happening because when we ignore it, it is seen as okay and that we don’t mind what’s going on,” said Junior Yasmine Alrefei. “Looking back at history and learning from our previous actions, dehumanizing and ignoring what was happening to the Jews led to the Holocaust, and that exact problem is happening right now in China.”

Since 2017 the practices have only gotten worse and more secretive. The government does not deny that most of these facilities are in use but instead refers to them as “Voluntary Training Facilities” and have even released videos of “students” learning in the camps and talking about how if they were not put in such a place they would have likely gotten involved with terrorism. The Chinese Embassy released a statement informing the country that “Since the measures have been taken, there’s no single terrorist incident in the past three years.” As for their religious freedom, they responded that it was being “fully respected.”

However, through the use of first-person documents obtained through a variety of news agencies like the New York Times and Washington Post,  a far more grim picture has been painted of China’s defense policies.

Erzhan Qurban, an ethnic Uighur Muslim, was grabbed by the police on a trip back to China while he was visiting his mother. They accused and incriminated him within a matter of hours, claiming that he intended to commit terrorist acts abroad. Without any trial, and without any jury, they locked him in a cramped detention facility with 10 other men and they were put under 24-hour supervision. Qurban was told that prayer was not permitted and he would be punished and that he would need to keep his face shaved for the entirety of his stay. If any of these men disobeyed, they were forced into a rigid room for solitary confinement.

“It was not education, it was punishment,” Qurban said to a BBC reporter. “I was treated like an animal.” His stay lasted nine months and he is unsure of how long the other men have been there.

China’s efforts of wiping out Uighur Muslims is one that requires its victims and the media to become silent.

“Any time there is a genocide the media should be bringing attention to it,” said social studies teacher Mr. Anthony Lanfrank. “It doesn’t matter what the U.S. believes, the media should still report on it. If the media doesn’t report on this, it’s only going to get worse. A government can’t wipe out millions with a snap of their fingers. They need the media to be silent for this to continue.”

It would be naive to believe that simply posting a hashtag or a story on Snapchat would make China address its grotesque violation of human rights. But many believe that the world should know what is going on.

“There are so many bad things happening right now it’s natural and okay to take a break,” said Lanfrank who also teaches the Global Issues course at SHS. “But when you have an ethnic cleansing or genocide on a scale like this happening you have to care — you just have to.”

Every single day more and more Uighur Muslims have been forcefully imprisoned and stripped of their cultural identity. While the US has imposed sanctions on China there still has been no concrete action taken to directly stop the systematic annihilation of an ethnic minority that has been on this earth since the 16th century.

“I know kids can’t go to China and stop this genocide,” said Lanfrank, “but teaching them what happens there is also teaching them how to prevent something like that from happening here.”